The Canadian Foreign Affairs Minister, John Baird, has just severed diplomatic relations with Iran, the timing of the move leading many to wonder if Canada has inside information about an imminent US-backed Israeli attack on Tehran.

The United Nation's nuclear agency has overwhelmingly rebuked Iran for failing to act to diminish fears it is developing a military nuclear option.

Greece is an economic basket case, Spain is in trouble and the European Union is considering a banking union to solve its monetary woes.

For 23 years, police in the U.K. lied to the world and its own citizens about what happened at the Hillsborough Stadium disaster.

The U.S. ambassador to Libya was assassinated. Anti-American protests are sweeping across the Arab and Muslim world.

The interest rate is, like, nothing, and manufacturing productivity has returned, but the U.S. economy is not adding jobs.

It looks like the NHL season will be shortened or scrubbed over a money fight between players and owners that will lead to a lockout.

The deal to build a new arena in downtown Edmonton is crumbling. (Granted, not everyone would agree that is a bad thing!)

You get the picture. And you'll likely agree that the weight of the above is not completely counterbalanced by word archeologists might have found the warped skeleton of Richard III, or that a cat running is for mayor in Halifax.

Yes, Salman Rushdie is speaking openly about the political darkness out there, but it's still Hobbes who has the mic. 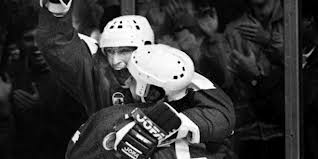 Into this, I propose a small act of Canadian beauty. Okay, it's a mountainous act. And a bit outrageous.

I would like to rename a pass in the Alberta Rocky Mountains after the two greatest Canadian hockey players ever. It would be called the Gretzky-Lemieux Pass.

Yes, it's cheesy. But, do you remember the closing ceremonies of the Vancouver Winter Olympics, and how much cheese -- beavers, dancing Mounties, giant table hockey players, inflatable moose -- was served up? Proudly? The creative directors of that event divined a willingness in the Canadian audience to make a little fun of itself in front of the world. Life may be solitary, poor, nasty, brutish and short, but there's time for a smile, too. And nobody else seems to be laughing. Everybody else seems to be burning flags and holy books. So, yes, there is groaning wordplay at play in the proposal, but, hey, we're small and big enough to deal with it.

Full disclosure: I am still under the spell of the hockey played in the 1987 Canada Cup between our country and the Soviet Union. Twenty-five years ago this month we saw hockey played at its peak. And while Canada had many stars, it was Gretzky and Lemieux who showed us the way. And not just as supreme individual offensive stylists, but as artists who fed off each other, achieving a plateau of greatness not available to them when playing with other teammates, no matter how good. It was pure and refined and all those other words like rare that come to mind when you're in the mountains. Lemieux scored both game-winning goals in the final, Gretzky assisted.

But, why, besides the pun that resonates among a winter people as proud of their mountains as their hockey heroes, a pass?

In hockey, a pass exemplifies teamwork and cooperation, a willingness to put one's own interest in the service of a greater project. Canadians like to think the same of themselves. You're not just on your own.

In a range of hills or mountains, a pass is a route through. Passes are often found just above the headwaters of a river.  They are bridges, of a sort. They take armies and explorers, traders and immigrants from here to there.

It's my argument that that is the legacy of Wayne Gretzky and Mario Lemieux. They took a nation of hockey fans to another place, where hockey wasn't just stickwork and dropped gloves and hooking and systems. 99 and 66 were hard-to-find portals.

Now, all the ugliness out there, and all the ugliness waiting its turn to present itself to us, makes this a singularly bad time to expect this idea would get anyone's attention. But, maybe, for the 30th anniversary of the Canada Cup in 2017?

Gretzky and Lemieux belong in poems. And our poems are our mountains. 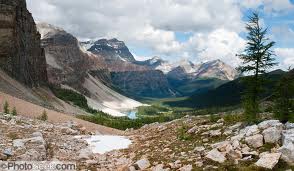