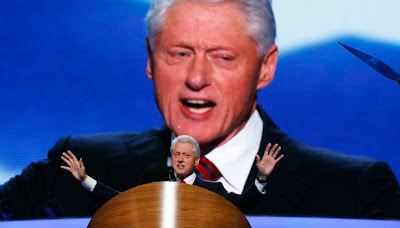 There is still general harmony in the twitterverse today, at least on the question of how Bill Clinton did in his speech last night to the Democratic National Convention.

It was very good. And it was very good for a lot of reasons, some of which I understand, some of which are way beyond me. Many out there agreed the speech was either or all of high rhetoric, a splendid defence-attorney closing statement,  pure music or,  you can see where this is going....

James Fallows ‏@JamesFallows
Secret of Bill Clinton's rhetorical success? He treats listeners as if they are smart. http://bit.ly/RduqMB by me


Marc Lamont Hill ‏@marclamonthill
I think Clinton's speech was a game changer. He made a compelling and persuasive case for a second Obama term. He hit all the notes.


Roland Scahill ‏@rolandscahill
Bill Clinton seduced the entire country last night. That man has got it.


But, driven by the folly of artificially making an oral performance stand still long enough to be dissected, here are a few of the tools Clinton used to craft that speech, or, as he would say, that talk.

Epithets have long, long been a favoured device to turn sound into memory. And, so, of Obama, Clinton said, "he's cool on the outside, but burns for America on the inside." Or, of Romney and Ryan's economic policy, "we can't afford to give the reins of government to those who would double down on trickle down." And, of course, the folksy "a broken clock is right twice a day."

Imperatives focus the attention. "Don't you ever forget." "Listen to me, now." "So, here's what I want the people at home to think about." 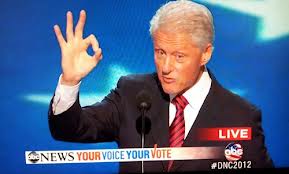 Aw, Shucksisms, including Clinton's habit of dropping the g when he said things like, "I'm fixin' to tell you why," and his discovery, as just a boy from Arkansas, of the "a-rith-ma-tick" behind budget surpluses, still work -- even with a Brooks Brothers suit. Clinton 1, Romney ZEEEErow

From school days, we are wired to pay attention when involved in the grammar of Question And Answer.  How many questions were there in Clinton's speech? is a great question! There were loads. "So, who's right?" "Why? Because." "Now, what does that mean?" "So, let me ask you...?" "Are we better off?"

Clash matters. If the art of democratic politics has something to do with living together, then political speeches can't simply be flights of rhetorical fancy. They must refer to what others are saying, have said. That collision of ideas and arguments is, actually, one way they can be judged. Not clashing is just cynical. And, I think, that's what many found so refreshing about Clinton's itemized list of how he believed Obama and Romney differ on jobs, energy, student loans, health care, Medicare, Medicaid, welfare and debt. Further, the clash on each of those points was in the service of the question the Republicans believed was their killer app, that same are we better off? But, this time, it's Clinton and the Democrats who are appropriating (and, admittedly, modifying) the question. But the point is they didn't hide from it

Repetition is a lost art in the 140-character age. Clinton began the speech with seven sentences that began with a version of "I wanna (see Aw, Shucksisms above) man," including the humorous, penultimate declaration that "I wanna man who had the good sense to marry Michelle Obama!"

Rhythm is more effective than volume, especially when the volume is turned down. Whispering all of a sudden, as Mayor Castro did in his keynote address, feels contrived. And, so, Clinton was much more fond of making eight sentences out of one with a staccato'd, hand-gestured "Joe. Biden. Did. A. Great. Job. With. Both." And, again, when he was going to keep President Obama On. The. Job!"

Empty Spaces. Justifiably, there is more attention given to the meaty sentences of a major speech. Claims about job growth or welfare benefits are the stuff of fact checkers. That's where text folk dig it. But there is also an art to the conjunction areas of a speech, those zones where the speaker pauses for applause, gets it, and, many times, just loses momentum.  A break point given right back. But watch and listen to the Clinton speech. It's marvelous how he managed those applause breaks and stayed on top of them, like a surfer, with versions of "but that's not all" and "I'll tell you something else."

Suspense. "And you won't be laughing when I tell you this."

All of these devices helped Clinton and his command of story connect with both the audience in front of him,  and the technologically-enabled audience at home that wasn't watching the Cowboys-Giants game.