Thanks For Operation Friendship

One by one, some with eyes up, some with eyes down, they walked up to the counter I stood behind and each took a lunch tray. And said thanks. What they were thankful for was a salami sandwich and a bowl of chicken-pasta soup.

I felt a little awkward saying, "you're welcome," but I followed my partner's lead and did so, over and over again.

I felt awkward because I obviously didn't deserve the thanks. Now, I'm not saying that I was being thanked personally, but, still, other people, the people and businesses and volunteers and agencies that support Operation Friendship, are the ones that should hear those thank yous, instead.

Because without those friends of  Operation Friendship's vision of a safe, non-judgemental haven for inner-city seniors, I wouldn't have had the chance to meet George from Liverpool and hear his stories about growing up in northern England. He still misses his grandmother. His grandfather would demand silence when he was tuning in a shortwave radio. His grandfather would give him a coin and tell him to go away.

"There was more camaraderie among neighbours in those days," George said. "People would bleed and die for the people they lived next to."

And without those who support Operation Friendship I wouldn't have been able to compliment on her style the woman with the blue-knit hat. And I wouldn't have had the chance to talk about Washington Redskins quarterback Robert Griffin III with the man wearing the Pittsburgh Steelers hoodie.

And without those who say yes to Operation Friendship I wouldn't have had two of the best cribbage games of my life. Bob claimed to have started playing only last year. Now I believe he is a man of his word, but, really? Last year? He somehow acquired in only a year the ability to rebound from a 20-point hand against him? In a year, he learned all the cheesy crib terminology?


So, instead of receiving the thanks, I would like to both pass them on, and add my own.

If you support Operation Friendship, thanks. Because not everyone gets the cards, or plays them like others do. 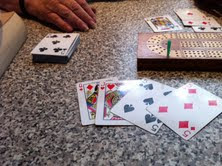