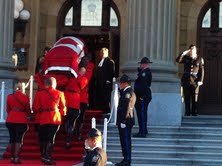 Historians and political observers have been of one voice since Premier Peter Lougheed died in Calgary last week.

It's all been some riff on the theme of giant worship.

With no disrespect pointed at what he saw around him when he took power, Lougheed nontheless transformed an agrarian-farming province into a modern Canadian political and economic and cultural entity.


Peter Mansbridge ‏@petermansbridge
Over the past 44 years I've covered them all, & interviewed most of them. On my landscape of first ministers, Peter Lougheed stood tallest.


Calgary Mayor Naheed Nenshi ended his statement on the premier's passing by invoking in a nimble way the legacy of the architect: "Remember the line from Christopher Wren's epitaph: 'If you seek his monument – look around you.'"

If Lougheed carried the province, tonight the honour was returned, as his remains were carried up the same steps he scaled for the first time four decades ago.

Reality may be socially constructed, or constructed in language, but it's also built out of actual stuff using real technique that comes from here. It's built culturally and economically and politically. Those who were there testify with their stories that no matter which of those paths you might have set out on, you met Peter Lougheed on his way back.

Who do you thank for the emerging fact that the next Alberta generation doesn't necessarily have to look elsewhere to find good work? You get the sense that Peter Lougheed started that story.

Here's a nice pic from the Banff Centre, which was supported in many ways through the years by the Lougheeds. It will be interesting to watch where the path Peter Lougheed started this province on goes. And who takes it.