September 05, 2012
You can see transparency everywhere these days. Politicians invoke it, social media pundits praise it, journalists make it their calling, everyone seems to trade in it.

Even the beauty industry is getting into the act.

There is a new L'Oreal Paris television ad for the company's Volumizing Power 24 Hour Mascara Brush that's now running. And running fast. It is a vivid, highly produced message, a mixture of tight shots of a model's luscious, thick-lashed eye and bold, moving, colour graphics. Funky fonted words, including VOLUME and COLLAGEN, leave me with the suggested equation that this mascara stick = this model's eyes.

Except that's not the whole story. 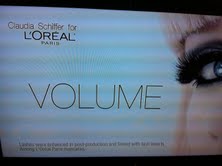 Because four brief times in the commercial is a disclaimer, written in footnote-size type, that what you see isn't quite what you get.

"Lashes were enhanced in post-production and filmed with lash inserts."

Or, with volume up: "Lashes were enhanced in post-production and filmed with lash inserts."

I have never seen anything quite like that, not that I watch mascara brush commercials all that closely. Now, it would be interesting to find out how that footnote came to be; specifically, if it was self-imposed or at the direction of and internal or external truth-in-advertising tribunal of some kind.

But even more interesting is the ad agency's apparent conclusion that the footnote doesn't matter. That running it four times doesn't matter. That one kind of media obliterates another. And that lifeless, immovable, rational print is no match for the emotion of video with a soundtrack and its favourite subject, the human face.

But there is still a duty in the eye of the beholder.
advertising edmonton glenn kubish