I asked a friend at work what The Tragically Hip song Wheat Kings was about, and he paused for a beat longer than he would have had he not considered the same question many times. And then said: "I don't know."

I took this as a good sign both of his humility and the song's profundity.

It was an honest question. I don't know much about The Hip. They were cool for the first time when I was watching my wife raise our children, and trying to help the mission where I could. Those were busy days. The 1990s are my mediated decade, preserved by photographs of my younger self. Among the art that didn't get in was The Tragically Hip's.

And it was a dishonest question. I knew the song was about David Milgaard's wrongful conviction and wrongful jail time served for the murder of Saskatoon nurse Gail Miller.

And it was an honest question, because song's visual shards—that weathervane, a killer's face lit by a lighter, pictures of prime ministers in a school hallway, the CBC TV newscast—what did they together mean?

Indeed, what does it all mean?

With news that Gord Downie has incurable brain cancer, the band has announced it's making one final tour of Canada. They hit Edmonton at the end of next month. Thanks to another friend, we have tickets, and a half dozen CDs, and the time to make up for lost time.


I drove to Calgary last week with  Fully Completely in the player. Highway 2 is irresistably musical. Off to the sides in the ditches, staffs of barbed wire are punctuated by bar lines of fencepost. The automobiles are notes moving in time along two giant clefs of asphalt separated by a median. Accidentals are visible. It is a good place for metaphor and for putting a song on repeat. This is how I listened to Wheat Kings about 30 times on the trip. I was by myself.

This is Saskatoon. This is also Matthew: Do not lay up for yourselves treasures on earth, where moth and rust destroy and where thieves break in and steal. The image of rust gives the sundown a sense of decay. This feels like entropy as winds swirl and bring faith to confusion. The rulers are the rich. And their passions are private.

In his Zippo lighter he sees the killer's face
Maybe it's someone standing in a killer's place
Twenty years for nothing, well, that's nothing new
Besides, no one's interested in something you didn't do

The sun, with its sense of wisdom and truth and warmth and goodness, is no longer with us. In its place is the  illumination from puny, man-made surrogates. And these symbolic cigarette lighters fail us. David Milgaard was sent to prison for a crime he didn't commit. He is in hell and we are in a void. The negatives pile up: Twenty year for nothing, well, that's nothing new/Besides, no one's interested in something you didn't do.

I imagine these lines sung by an ironic chorus looking down on Milgaard in his dark prison cell, as  outside, in the unreal world, fortunes continue to be made from nature's gifts. Wheat becomes grain and grain confers the power to attract all kinds of pretty things. But there is a fundamental question:  Can this system bring something new in the morning? Can it do anything beyond replicating itself? What does it have to say about a man in prison who shouldn't be?

There's a dream he dreams where the high school's dead and stark
It's a museum and we're all locked up in it after dark
Where the walls are lined all yellow, grey and sinister
Hung with pictures of our parents' prime ministers

We are back in the dark of Milgaard's dream. It is a jailed dark and now it is made clear that we are all imprisoned by nostalgia and the convenient democratic faith that time by itself makes things better. But time itself is just like the wind. It just blows. And one political leader is replaced by another by another by another.

The chorus pulls apart the word wheat to reveal the we inside. It asks us to confront again our hope that tomorrow by itself will reveal a world more just.

Late breaking story on the CBC
A nation whispers, "We always knew that he'd go free"
They add, "You can't be fond of living in the past
'Cause if you are then there's no way that you're going to last"

The artificial lights of the television studio help the anchor broadcast the news that Milgaard has been exonerated. And they reveal us to us at our most civically impoverished as we turn his vindication into our own.

By this point, the listener may begin to suspect that the petty creep of of tomorrow and tomorrow brings nothing but more of what today is made of. Which is good if you are a wheat king, a pretty thing, or like to watch them.

And that's what the lesson of the chorus might very well be. It is people who change things. That is why, perhaps, Downie is fond of dedicating the song to Joyce Milgaard, who did. 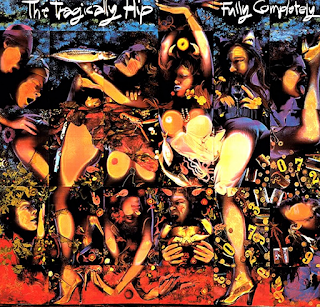