(Quick Note From Me: This is an article written by Ottawa writer and friend, Margaret Baer-Opazo. It's about her cousin, the brilliant Patrick Anderson, the star of the Canadian men's Paralympic basketball team. But it's also about heroes and sons and figuring out who is worth looking up to.) 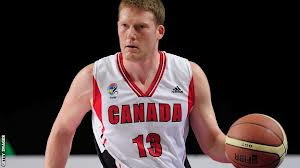 In our cynical age of tainted athletes, doping scandals, and corruption, anyone watching the coverage of the 2012 Paralympics from London can see that disabled athletes have become our true heroes.

Huge crowds have been thrilled watching exciting performances by athletes showcased by the host British media as powerful and strong, “sexy” and “cool.”

What the world is discovering now, my family has been watching for some time now.

My cousin, Canadian Patrick Anderson, is widely considered to be the world’s best, most complete wheelchair basketball player.

Combining power, speed, pinpoint shooting, and vision, he is the LeBron James of wheelchair basketball, but with a fourth quarter.

As captain, Anderson has led the Canadian Men’s Wheelchair Basketball team to two gold medals in Sydney (2000) and Athens (2004), a silver medal in Beijing (2008), as well as numerous World Championships.

Yet, far from being celebrated as heroes across our nation, Anderson and his team’s dynasty have been Canada’s best-kept sports secret. Few have ever heard of them or watched them play -- until now, when the British media are celebrating this powerhouse Canadian team and their poster boy, Pat Anderson.

Years ago, when Pat was visiting us, my two-year-old son walked around our house on his knees, emulating his double-amputee cousin and, in that instant, normalizing his physical reality.

Years later, that same son proudly delivered a school speech on the subject of his hero, Patrick Anderson. Currently, he has given his hero the ultimate compliment by updating his Facebook profile picture with Pat’s photo.

My four athletic boys have joy-ridden his hi-tech wheelchairs, listened spellbound to his game stories, and held his shiny and heavy Paralympic medals. 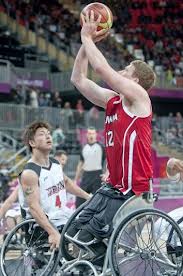 They have only ever seen their cousin as a buff, talented, elite athlete.

And, even more importantly, they know that Pat shines with humility and grace, not to mention impressive musical talent. He embodies that supremely rare combination of talent and class.

To be sure, disabled athletes fundamentally challenge our idea of the elite athlete as idealized human specimen. We aspire to the Olympic motto of faster, higher, stronger and the beautiful, perfect body.

However, perhaps South African runner Oscar Pistorius, who competed with prosthetic blades against able-bodied athletes in the London Olympics, has radically altered our collective perspective.

The game has changed. Forever.

We know that behind every elite athlete is an inspiring story of talent and years of hard work in the chase for international success.

However, disabled athletes must persevere well beyond this to overcome substantially more challenges and limits.

Born disabled, struck by accident, or felled by illness, their background stories are often heartbreaking and never easy to hear.

But when these imperfect bodies achieve amazing athletic feats, do we not witness the human spirit in its purest form?

They make us wonder and dream about what disabled people CAN do, instead of what they cannot do. They make us reconsider how we see and treat all people with disabilities.

In the case of wheelchair basketball, the word “disabled” is surely a misnomer. The size of the court and height of the nets is the same as in the NBA, yet these players are making shots from five feet, not seven, while sitting strapped to a wheelchair.

The sport is so exciting and challenging that, increasingly, able-bodied athletes are joining teams in professional leagues in places like Germany and Australia.

Patrick Anderson’s storied life began in 1979 in Edmonton, and at age three, his family moved to the Southern Ontario town of Fergus.

He excelled at all sports as a boy, but shortly before his tenth birthday, little Pat was almost killed when he was hit by a drunk driver. Doctors worked hard to save his life, but they had to amputate both legs beneath the knees.

Early on, Pat was determined to remain athletic. Knowing nothing about wheelchair basketball, he attended a camp as a young teenager. He was immediately hooked and showed talent from the start.

“Initially it felt like a huge step backwards, but as the months went by, I realized that he knew what he was doing,” recalls Pat.

Like every elite athlete, Pat spent years practising and honing his basketball skills, and whenever he competed, he excelled.

At 17 years of age, he joined the Canadian Men’s National Wheelchair Basketball program. From that time on, Pat has travelled the world leading Team Canada to numerous championships. 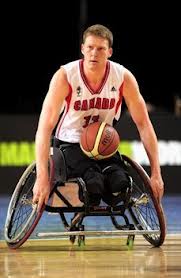 In 1997, he was awarded an NCAA scholarship at the University of Illinois in Chicago, where he teamed up with former national team coach Mike Frogley.

Frogley jokes that “after God created the world, He worked on designing the perfect wheelchair basketball player and the result was Patrick Anderson, with incredible intelligence, long arms, long trunk, and without the extra weight in front to slow him down.”

“I don’t think there’s anybody better than him in the world today. No one else can do the things he does on the court. All the young kids coming up in the sport today are measured against Pat.”

What makes Patrick Anderson such a special basketball player?

Frogley explains that while Anderson has exceptional height, speed, and shooting skill, his greatest asset is his game intelligence, an unusual ability to anticipate the play on both offence and defence and then choose the highest probability move.

“He has a Gretzky-like anticipation, seeing 3 or 4 moves ahead. With this understanding of the game, he sets up his team mates like a chess board.”

Over his career, Pat has also grown into the role of leader and mentor within the disabled sports world. At the Vancouver Paralympics in 2010, he was honoured to serve as Mayor of the Athletes Village.

Some years ago, Pat visited my sons’ elementary school in Ottawa. Kids gasp as a guy in a wheelchair whirls around and effortlessly drains baskets from the centre circle. He spins on a dime, flies past, and comes to a sudden halt inches from their awestruck faces and their teachers’ nervous glances.
After this technical tour de force, Pat talks briefly about his accident, and focuses on his sport before passing around his gold medals. The kids are wildly impressed, and they ask questions about the high-tech wheelchair and how wheelchair basketball is played.

Afterwards, they line up for his autograph and talk excitedly about how Anderson “rocks” and is “cool.”  Patrick Superstar.

Children are way ahead of the curve: they are excited and inspired by the skill, strength, and courage of any elite athlete, regardless of the kind of body they happen to have.

Now, just maybe, the rest of the human race is catching on to what children have always been able to see: the true superheroes in our midst.

And it dawns on me that, all along, it’s been their cousin Patrick who has shown my boys how to really walk.

Postscript: Mag was on CTV Morning Live in Edmonton this morning getting the good word out! 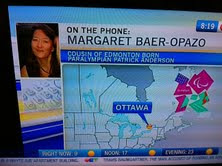