A Springsteen concert is about a lot of things, some of which will be revealed only in the fullness of 4/4 time. Trying to make stand still the essence of seeing him perform live is beyond me. Besides, seeing him is not really about standing still at all. And double besides because another great chronicler of America, John Steinbeck, famously reminded would-be reporters that what is there to be seen depends as much on the seer and the light and the time and the inner music as what is supposedly there.

"I discovered long ago...that...what I found was closely intermeshed with how I felt at the moment. External reality has a way of being not so external after all," he cautions.

Caution heeded. The best I can do is record that in the screen shot above, not seen but standing beside and slightly down from me, are Mikey and Shelagh. And that we sang our lungs out to Hungry Heart, punctuating Baltimore with a raucous Jack! And we were happy. Everyone except one security guard there was happy. Look at the faces!

Those faces came from all over. Just in our little circle on the floor were Bruce fans from Calgary, Edmonton, Vancouver, Washington state, and Norway.

And that's part of seeing Springsteen, the trip to get there.

From the waiting on a sunny day start to the drive outside Leduc. 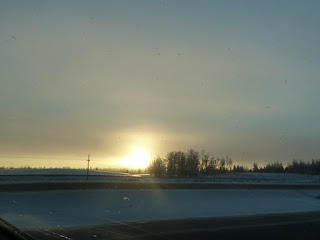 To the dancing in the dark sunset outside Vernon. And then to Springsteen in light and in dark. 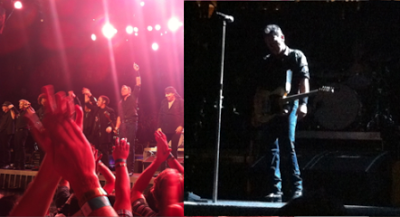 We drove through some tight sections in mountain passes.

And we heard Badlands. 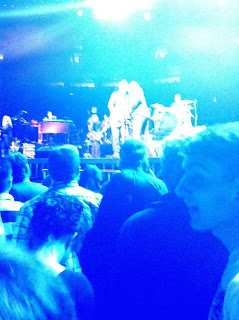 You get the picture. The music was with us for the joyful journey. And then Mikey and his mom, from three rows from the front of the stage, looked at each other and screamed out together:


A notion deep inside/That it ain't no sin to be glad you're alive!!

A lot is made of Springsteen's focus on the dark side of the American Dream. He's made his pirate's treasure on that. But a Springsteen concert is a radically happy, joyful experience.

Dark and light, for sure, but hands up if you think light gets the final word. 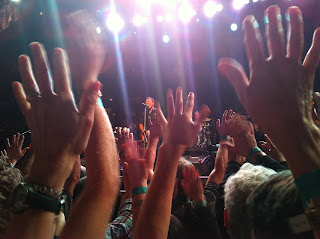