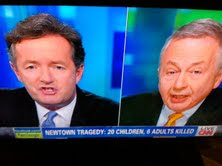 The general topic was where Newtown should point American society on the question of gun control. It turned into a yelling match, with Morgan calling Pratt a stupid man, a dangerous man, an idiot, and Pratt openly suggesting that Morgan shared responsibility for the Newtown murders.

Those viewers who had clung to the belief that discussion in the electronic public square should be fuelled by opinion intelligently rendered, and respectfully clashed with, came loose and hit the ground during the segment.

But, on a few fronts, it was, nonetheless, interesting and insightful.

There is an anti-European animus, barely disguised, in Pratt's attack. In his first answer, he cites mass murders in Europe, where the violent crime rate is allegedly higher. Soon after, he mentions murder rates in Europe. Pratt then refers to Morgan's interruptions as characteristic of Brits. And he caps it off by suggesting that Neville Chamberlain is Morgan's role model because of their fondness for disarmament.

These are words aimed at Morgan and his viewers, but their real function is as code for the gun lobby base, it seems to me, reminding them the so-called right to bear arms was delivered at about the same time as freedom was won from the, well, the British. This is a not-so-subtle reminder that the Second Amendment is cherished because it is seen to preserve the ability of the American patriot to rebel not against the media but against the government. And that doesn't mean computers and pamphlets and social media. It means guns.

Pratt also brought down for examination the ontology that driveshis section of the pro-gun movement. And it goes like this: evil is a reality and the given that must be confronted when we consider how to protect ourselves. Evil always has the right of first action. Faced with that overwhelming and cosmic truth, individuals are judged obtuse if they put their trust in the authorities or calculate that their safety may be best ensured by even temporarily delivering to a collective their right to defend themselves.

Says Pratt:" If you believe and understand [faith and knowledge implied by those terms] that there is evil in the world, then you don't try as your first line of defence to solve it psychiatrically. You protect yourself with a gun."

For many, it's a compelling vision, but, in the end, hopeless. It points to a population armed to the teeth. It suggests a kind of school safety based on the doctrine of Mutual Assured Destruction. It accepts real dead children as an unhappy consequence. And it ignores an argument from the same terms. That is, let's grant there is evil in the world. And even that it is an immoral gamble to try to solve it psychiatrically, whatever that red herring means. Doesn't it follow that lawmakers should just build low and solid and try to make it as hard as possible to have weapons of mass destruction easily obtainable? Isn't that also a way to deal with Pratt's evil?

And the Morgan-Pratt encounter also revealed a curious exemption being demanded by the gun lobby when guns are used improperly. Of the Newtown killer's mother, who was killed in her sleep with her own guns, Pratt says: "And, unhappily, she paid very dearly for her poor judgement. But that's not the reason you should be able to come down on everybody else who is a law-abiding gun owner, who uses good sense, and to say we gotta pay for that person's stupidity, for their shortcomings."


The remnant of democratic theory that I remember underlined the need to have a democracy's  citizens act in self-restraining ways that do not destroy the freedom all enjoy to pursue life, liberty and happiness. The tradition teaches that there is no escape from laws. If you don't want to have rules or restrictions descend on you, then rule yourselves accordingly. Liberty isn't freedom from laws as much as the ability to live under one's own laws, and this applies to both the individual and the political community.

Now, you can bemoan the clawback of freedoms that is so obvious in our times. And you can rightly point out for the benefit of all each time another bit of freedom is removed. And it is good work to do everything possible to shine light on those whose inclination is safety at all costs.

But I have yet to hear a reasonable alternative to the rule-yourself-or-be-ruled option. And the gun lobby has to accept that. To avoid restrictions on guns after guns are used improperly, the gun lobby should be the loudest voice of criticism of the wrongdoing. But they aren't. They are silent, or abstract, or belligerent, or they find refuge in patriotism.

This was not Morgan's finest hour. But it's not just journalism on trial. Also being judged are the arguments of those who ask us their fellow citizens to accept the rightness of near-unlimited access to unthinkably-to-the-Founding-Fathers-powerful killing machines.

And I think Newtown has exposed them. Time has taken care of them. They have had to accept the deaths of 20 children to keep the haphazard scaffolding of their logic in place. Now the politics has to catch up.