One More Question From Newtown

December 14, 2012
Tonight on television are images from Newtown, Connecticut, where a gunman killed 26 people at an elementary school before killing himself. Most of the murdered are children. 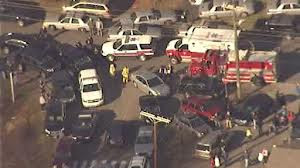 They are the unusually usual images. Police officers with leashed dogs. Parents running. Aerial shots of a school surrounded by police tape.

The brush is being cleared down the path of familiar questions. Why did this happen? How did it happen? How did the killer get his hands on the guns? Who are the victims? Who are the heroes? Were there warning signs? What will be the damage to the little people who survived? Was the school locked? Is this our reality? Is this due to lack of empathy or a brain disorder? Can these disasters be prevented? What does the Second Amendment say? Will there be copycat crimes? And on and on into tangled arguments that admit of different perspectives.

And our hearts are broken. And we are tired. And there are no words. But there have to be words, or else it's the grammar of the bullets. And U.S. President Barack Obama wipes tears from his eyes, and the camera tightens the shot as we are taken closer into his emotion. It's a kind of disaster pornography.

The media senses it is somehow implicated. I have never heard before what CNN's Anderson Cooper said tonight, which was there would be no repeated mention of the suspect's name for fear others would get the lesson they could kill their way to notoriety.

Kill or steal the children. From ancient times, it has been an unnatural formula for winning wars big or small. Take away the next generation.

Here's one more question: why is the United States allowing that to happen to itself? 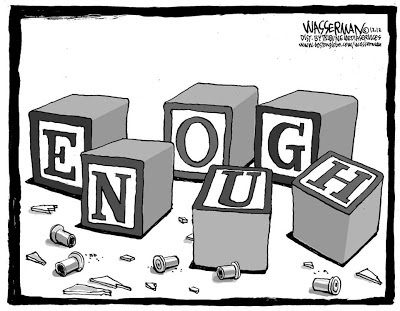