There is a shot in the Shut Up And Play The Hits documentary where James Murphy, performing Losing My Edge, arrives at the lyrics I'm losing my edge/To the Internet seekers/Who can tell me every member/Of every good group/From 1964 to 1978.

He recites those lines holding a mic with his left hand while, with his right, mimes the touch gestures -- taps, pinches, swipes -- that are so well known to, are the calling cards of the wired kids from Tokyo to Berlin to Brooklyn, the relevant, really nice kids who hold in their own hands their tableted nervous systems and memories.

The knowledge of personal witness. Or as Murphy would capture it, the knowledge of I was there. In particular places, spaces, times. Without the cyber prefix. With hard work added.


I was there in 1974 at the first Suicide practices in a loft in New York City.
I was working the organ sounds with much patience.
I was there when Captain Beefheart started up his first band.
I told him, "Don't do it that way. You'll never make a dime."
I was there.

The interviewer character in the documentary picks up on this theme in a conversation with Murphy in a New York City diner that gives the documentary its narrative backbone.


Interviewer: Sometimes I think that Losing My Edge is the most brilliant thing that you've done... And the timing of it was really good because it was, this, the Internet was causing people to have a different relationship with history.
Murphy: [indistinguishable] Yeah.
Interviewer: And a young person could suddenly be as fluent, didn't have to have the life experience...

I don't know enough about Murphy or his music to pretend to know his verdict on the epistemological battle being waged in his song. But an understanding of story suggests he might leave us a clue with its final line.


You don't know what you really want.

This is a closing argument made wonderfully ambiguous by the verb-or-noun "want." Is Murphy saying the kids don't know what they desire? Or, perhaps, more likely, the knowledge they lack? 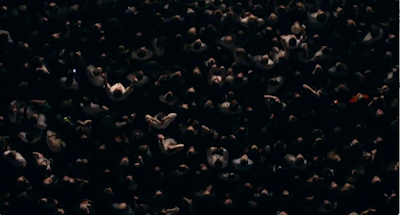