I Still Carry You Around

December 03, 2012
Every now and then I like to enter writing contests to win stuff. On Twitter, I follow @Momentum Mag, a cycling advocacy group and publication. Spokespeople, in one sense of the word.

Anyway, they are giving away a cool pannier to someone in the North American cycling community who tells them what they would carry in it. 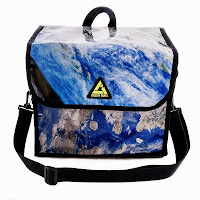 Among my many fascinations: panniers. I routinely stop to photograph them,  and then start cycling again before I draw too much attention to myself. As in this still life from earlier this fall:

So, this is what I wrote as my contest entry.

I would definitely use it for groceries.
A few steaks for the grill, some corn cobs, a bag of potatoes for roasting, fixings for a salad, maybe a few cold beers if there's room -- which it appears there is.
In other words, I would use it to carry what's important to me: the food that frames the conversation around my family's dinner table.
I would carry a bit of yesterday in the pannier, too. It looks like there's room for the memories of cycling with my friends on those long highway tours in the mountains all those years ago. Cycling is like that. Start spinning your pedals and moving pictures from the past are immediately projected, at about 78 revolutions per minute, in your imagination.
Because it was on those trips that I learned, really learned about travelling with what you can consume, and no more. Too much was too heavy and too heavy slowed you down.
Besides the groceries and the memories, I would also carry a hope in that cool pannier. You might not be able to see that hope as I cycle by. But it's a hope that one person who sees me, sees the pannier will decide to leave the car keys on the counter next time and choose, instead, to take a bicycle to the grocery store.
It's nice to know all of that can be carried in the Green Guru Dutchy Upcycle Banner Pannier.

I could use a new pannier to take some of the load off those classics from 1985.