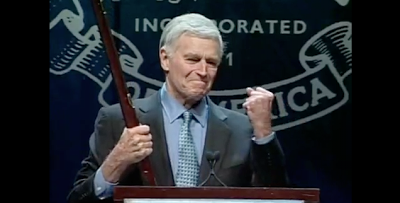 But calling card isn't the right term. It comes from the printed word world. Here, Heston is dealing at the more primitive level of the picture. At the end of his infamous 2000 speech to an NRA convention in South Carolina, he stepped back from the podium and was handed a replica Sharps rifle. We know the image. Heston named presidential candidate Al Gore as the enemy of freedom, delivered those five words and held the weapon up to spirited applause.

As images go, it was crazy good.

Of course, the image was nicely constructed. The weapon, an icon of the American Old West, smelled of nostalgia and freedom. We can ask how much different the image would be if the yeoman-farmer-playing Heston instead held up a Bushmaster M17S semi-automatic bullpup rifle? Somehow, the manufactured purity of the image would have been sullied, no?  Someone might have asked: Mr. Heston, all this talk about the virtues of the Jacksonian man and this modern killing machine?

The simplicity of the image (and doubly powerful for that) hides the simplicity of the argument. Nobody was trying to remove the Sharps rifle from Heston. The questions then, as now, had more to do with keeping the exponentially higher power of modern guns out of the hands of modern madmen.

At a deeper level, of course, it was an image that spoke to those Americans who see any form of gun control as a neutering of the self-defined patriotic imperative to keep possible the ability of the people to revolt against the government. What such a revolution would put forward as a new form of political legitimacy was never made clear, but one thing was very clear: no guns, no ability to revolt. The Heston image blew life on those embers.

As images go, it was crazy good.

That's when Adam Lanza, from Newtown, Connecticut, shot his mother, took her guns to Sandy Hook Elementary and shot to death six adults and 20 first- and second-graders before killing himself. From that massacre have come many questions, many words, much grief and many tears. And, in the photographs of the murdered innocents, some new images.

The visual news media quickly turned that list into a devastating voice-over. Viewers hear the president's voice and see the photos of the children. 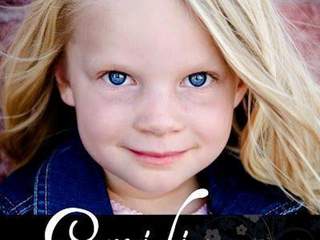 As images go, Emilie is better.

If anything can redeem those deaths, it is the possibility that a majority of U.S. politicians will now stop following the image of the actor Charlton Heston, and, instead, choose to be led by children on this one.

Tonight it is Friday, Dec. 21, and it's one week since the Newtown murders. And it's been one week of being washed in those now-political images. And the lesson is starting to be explicitly drawn. Here is Anderson Cooper and a Roman Catholic Church leader on CNN just now. They bear witness, from two distinct traditions, to the power of images.

Tonight, it is Thursday, Dec. 27, and it's almost two weeks since the Newtown murders. And I am still struck by the power of images, even the power of the suggestion of images:

RT ‏@kelsey_davey watching the movie with dad. i cant believe this footage and the 911 calls. please don't make a movie for Newton.
If the public could see what a .223 bullet from a Bushmaster does to a 6 yr old face or body, the gun debate would b over & the NRA finished
********

Today, Jan. 5, 2013, a new image of the U.S. president being informed about Newtown has been shared:

********
It's Jan. 16, 2013, and today U.S. President Barack Obama publicly dealt out his gun control proposals (universal background checks, assault weapon ban, limitations on magazine capacity) and demonstrated that this is still a war of images:

The president pulled out that tired-sounding equation that his proposals should be adopted if they have a chance of saving the life of even one child, and then he said they should be supported, pause, for Grace. The television networks obliged with a full screen punctuation mark to the power of single image. 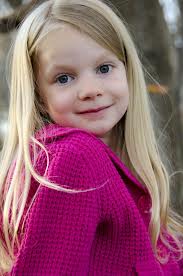