Singular Thoughts On You!

May 06, 2012
It was a modern communications moment, complete with the immediate dissection.

I was driving by a clever billboard near the Calgary International Airport. It was a giant ad for Chinook Centre that read something like, "We're Ready For Your Runway!" It made me smile, a reaction itself which is notable given that I was in communication with an inanimate object, so, a big check for the designer!

Just as quickly, though, the giant sign was behind me, waiting for the next driver to come into its field, and another thought presented itself. It was a vague thought, more of a picture in my mind, really, and the picture or the form was of a giant, unblinking eye. 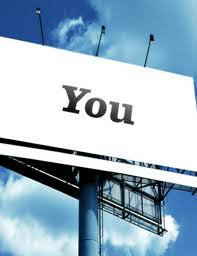 And as I glanced in my rearview mirror, I felt for a brief second a bit robbed. Not in the sense that the ad took my money, or even that it took the attention I willingly gave it. But robbed in the sense that the punctuating laugh seemed to give the encounter a sense of a real bit of communication. But there the dumb sign was standing there behind me waiting to crack the same joke to the next driver. And the next driver. And the next. And it would send out the same line even if no one drove by. Even if it was raining. Even in the middle of the night.

Call it good advertising, or dissemination posing as dialogue, or call it what you will. It has made me think more about that way of getting a message out, and the use of the words you or your to help do that work.


Everything, says U.S. President Barack Obama yesterday backstage in Columbus, Ohio, in a message streamed live while he was being introduced by his wife, everything is going to depend on you.

The English language is complicit in this clever way to send a message. And the listener is, too. Those who are sending out the message are using you in the second person plural, and counting on those hearing it to translate it into the second person singular.

And then to the first person singular for action, whether organizing, voting, or shopping.

I'm going to keep my eye out for you!