Among the most intriguing aspects to an outsider of the public battle between Toronto Mayor Rob Ford and Toronto Star city hall reporter Daniel Dale is the battle of storytelling methods.

Quick background (in words): Canada's biggest city has been consumed by the debate over what precisely happened the evening of May 2, when Dale was caught by Ford outside his home. Ford suggests Dale was peering over his fence, spying, in effect, and admits to barely withstanding the temptation to hit the journalist, who dropped his cellphone and ran away. Dale says he was getting a look for himself at a piece of parkland adjoining the mayor's property that Ford is reportedly trying to purchase to enhance his family's security by building a fence on it.

The situation has now spiralled up and out to the point where the mayor has said he will speak to no reporters if the Toronto Star is present. The Star has countered with a suggestion the mayor used Dale's cellphone after the encounter, an alleged act that newspaper lawyers may review.

There has been endless commentary, including an argument that the episode highlights the different notions of masculinity. 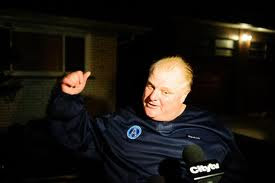 Now, and predictably,  dubbed Fencegate, the episode about conventional media tactics has been all about the use of media by the combatants.

After calling 911 on Dale, the mayor then called the media on him, giving the visual media a walking tour of his property and the spots where he said Dale was, among other things, standing on a cinder block to trespass and get photos of his land. Wearing an Argonauts athletic shirt, an emotional Ford, shot in close up, lambasted the reporter, his newspaper, and pleaded for his family's privacy. 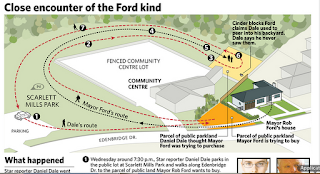 The Star put their graphic artists to work, serving up a step-by-step account of who was where when and who threatened to punch who when, even hitting an alien note with the map's echo of the Spielberg movie.

I haven't followed every change and nuance of the story, but there are a couple of tentative conclusions to be made. First, it certainly takes less time to get Ford's side of the story. Watch Youtube, go on a virtual tour as the "facts" are presented, and it is hard not to feel sorry for the mayor.

With Ford, I get to hear his voice, the emotion in his voice, and that has an impact. With Dale, I get printed, isolated words. Ford is performance-oriented, Dale is information-oriented. * 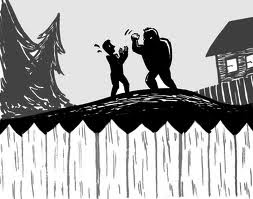 No surprise to those who follow the journey toward my MACT final project, but the Ford-Dale episode reminds me in a way of the Duckett Cookie episode, albeit with a twist. In that collision of communication styles, the literate Duckett retreats to his keyboard after a dramatic oral encounter with reporters, whose work is presented in video form. In the Ford-Dale encounter, the literate Dale uses the keyboard for the most part and the oral Ford uses the microphone.

In both instances,  it's a battle of two styles, and a battle for two different kinds of readers.