Write It Down (Slippery City Shoes 3) 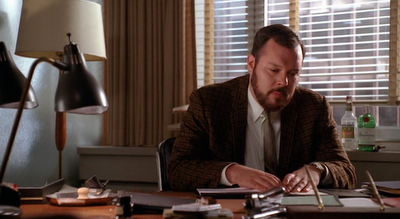 So that I don't forget this, I am going to write it down.

There is a great scene in Mad Men season 3 in which a hungover Kinsey sits at his desk, devastated. He is working on a project for Western Union and is actually competing against Peggy for Don's approval on it.  He is as upset this morning as he was elated the night before when the idea, maybe the best idea in his life, had come to him. But now it is gone. Not because it wasn't good. But because he didn't write it down. It is a short scene. Kinsey recounts the empty outcome of the conversation with the office custodian, Achilles.

Peggy: Are you ready? Don's expecting us.
Kinsey: I've got nothing.
Peggy: What a relief. Mine's garbage, too.
Kinsey: No, I had something, something incredible. But I lost it. I didn't write it down.
Peggy: Oh, I hate that.
Kinsey: It might have been the best idea I ever had. I did everything. I talked to Achilles. I spent last night recreating every detail of the evening, hoping it would come back. You know how it is. There was nothing, then there was it. Now it's nothing again.
Peggy: I am so sorry. How do you talk to Achilles?
Kinsey: He is a janitor with a very bad memory. You know what the Chinese say? The faintest ink is better than the best memory.


It is a short scene, but it connects to so much that I have been thinking about lately.

Ong teaches that you know what you can recall. I confirm this, and confirm myself as a literate person, by going to page 33 of Orality and Literacy, where I know that I will find this: "You know what you can recall...The organized knowledge that literates today study so that they 'know' it, that is, can recall it, has, with very few or any exceptions, been assembled and made available to them in writing." This is in contrast to the aides-memoires of oral cultures, including Homer's. Homer, who gave us Achilles.

Kinsey has learned this, to his grief. He was full of spoken words, in high verbal flight, but all of that is gone because, as he says, he didn't write it down.

You got to get her all down/
'Cos she's bound to go.

Those are the words the narrator in Ian Tyson's The Gift puts in the mouth of God, as He charges the great painter, Charles M. Russell, with capturing the scenes of the wild west -- the stars over Judith Basin, the shining mountains, the longhorn brands, the cow camps cold, the great passing buffalo herds -- before the land developers, interstate builders and barbed-wire stringers reworked it for themselves.


And that's what The Gift's God charges Kid Russell to do. Paint it all, draw it all before time takes it away. I can't help put think Tyson sees his own artistic mission blessed in this divine manner, and that it's also his job to put down in words and musical notes the vanishing west, keeping it, in a sense, still. Still enough for others to find because he wrote it down and recorded it.

But before I could hear Tyson at the height of his powers in  The Gift, he did what Kinsey didn't. When the idea for the song came to him wherever it did, he wrote it down. Perhaps part of the reason the faintest ink is better than the best memory is that others get access to the memory, and come to know it.