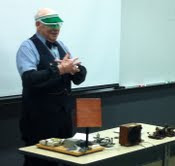 Jim Munsey, left, and his pal Bill Buchanan, two of the 66 members of the Edmonton chapter of the Morse Telegraph Club, were guests at the MACT 2012 Spring Institute this morning at the University of Alberta.

Gordon Gow, who directs the program, invited me to drop by and listen in, and it was a fascinating hour as the present intersected with the past.

The gentlemen railway operators talked about their love of telegraphy, the history of the invention, the meaning of What Hath God Wrought!, railway timetables, and the characters who used the electric dots and dashes to tell the stories of their time.

A lot of thoughts struck me as I sat there, and most of them had to do with the passage of time. To hear the pair talk about picture shows preserved a sense of the newness of movies for them. To have someone standing in front of you saying his father was in the First World War was not like reading those words in a book or diary. To hear them explain, and see the spark in their eyes as they did, how time was everything in keeping steam trains on their timetables, and that sometimes, when you ran out of time, hurtling trains would have to communicate their positions by sending up plumes of black smoke, to see and hear all of this -- right in front of you -- drew up another idea.

And that idea is that human beings are messengers -- and message.

While Jim Munsey and Bill Buchanan shared their stories of sending messages via telegraph, in the very instant they were telling us those stories, weren't they also somehow the contents of the story, the message, transported over the years and physical space just as surely as the dots and dashes they had sent down the lines moved across time and space?


One part of the message who didn't quite get through today was George Campbell , who is in the hospital fighting off some of the effects of being 88 years old. After the talk, Munsey sent George this message, preserved on smartphone: