May 08, 2012
The truth that it will always be more interesting and intriguing to determine not what is present but what is missing gives us a point of view to consider what the 2012 NHL playoff tournament is not serving up.

Of the mic'd arm and the man, I sing. Or, without a Canadian team still alive in this year's Stanley Cup odyssey, I don't sing.

It has become a playoff tradition in Canadian NHL rinks to let the full-throated fans in on a few lines of the pre-game Canadian anthem. Here is Mark Donnelly from 2007 in Vancouver:

There is some dispute, of course, about where the practice started, Edmonton or Detroit, but there can be little disagreement over the notion that the nation that does it best is Canada. In the Oilers' 2006 Cup run, singer Paul Lorieau's decision to stop singing and let the fans take over in the middle of the anthem was stunning and stirring and beautiful. On the few occasions I've seen where that interactivity is attempted in U.S. arenas, the result is unambitious and tentative. Lorieau, Canada, did it best. 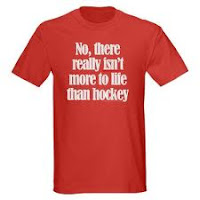 There is some reason for this. The first is that it's colder here and we play hockey to stay warm, so it's in the blood. And in Canada we end up buying and wearing t-shirts like these. I haven't travelled around the States a lot, but I just don't see those same kind of fashion statements on US fans.


And then there is the difference in the anthems themselves, and that points into deeper depths about the possible differences in the two nations.

The Canadian anthem is just easier to belt out. I think it's a simpler song. The Star Spangled Banner is as much a question as it is an exclamation. When Canadians are renewing their citizenship vows by asserting  with a beer in one hand that we stand on guard for thee, Americans are asking themselves publicly if the flag that survived the wars of the infant nation still fly o'er the land of the free and the home of the brave? Huh!

How would the tenor of O Canada change if we asked ourselves if we still stand on guard for thee? 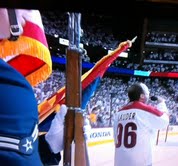 The American anthem is a political statement, or a reminder that America is a conscious political proposition. And that's just a little harder to sing your way through.