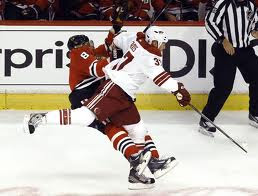 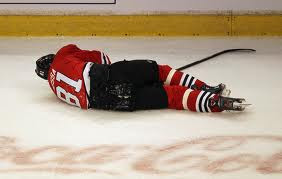 The string of images to the left tells the visual story of a hit yesterday unleashed on Blackhawk Marian Hossa by Coyote Raffi Torres.

Torres caught Hossa blind, without the puck, leaving his feet to deliver a shot to Hossa's head that left the Chicago star crumpled on the ice, motionless, helpless.

Don Cherry has condemned the hit. It's been a playoff season where the talk hasn't been as much about the goals, saves, passes and hits as it's been about the length of suspensions for dirty hits.

On cue, the NHL suspended Torres indefinitely. Informed speculation has it that he will draw a 10-game ban when his case is decided by the league.

Of course, there is a lack of proportion here. Hossa, a gifted player, was taken to hospital and realeased. He is reportedly out for the next game. 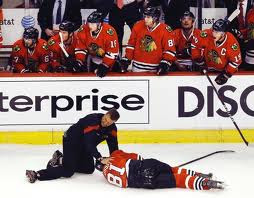 I would like to hear how an economist of the freakonomics school would explain Torres's possible motivation for delivering the hit. What does it mean that Torres, who makes $1.75 million, could face a $2,500 fine? Are there injury bounties in the NHL, like the NFL? What is a Cup victory worth?

Back to the lack of proportion. The Blackhawks may lose Hossa. I understand that is a big may against the certainty of the Coyotes losing Torres. But is losing Hossa for at least two games equal to losing Torres for ten games? 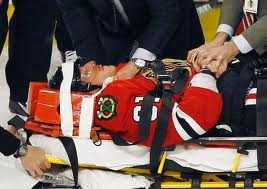 Just as the Blackhawks' chances are injured by having Hossa out of the lineup, why not consider penalizing not just Torres, but his team? Why not fine the team? Or why not find an algorithm that would serve up a couple of equivalent value players on the Coyotes, one of whom would be removed from the game, with full pay, for the length of the series, or until the injured player returns?

How would that change the emotional equation and the motivation to injure an opponent? 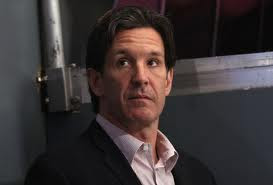 The objections are obvious. The players union wouldn't go for it. The NHL would blanch at the prospect of removing star players, and the revenue they bring from television ratings, from the games. Is  it constitutional to deprive someone of work in this manner? It's kind of Old Testament, this sins of the son visited upon the others, etc.

My only point is that those who love hockey -- not the business of hockey, not the violence of hockey -- but the art of the game deserve to hear creative ideas from smart people, if they haven't already given up on hockey.