I'd like to see New York City and Washington, DC, with Shelagh. I'd like to sit in a pub and have a couple of beers with our sons. I would like to do a decent job on my final project for my Master's degree. And I'd like to get my thoughts about trains going in the right direction. 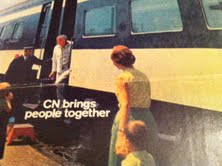 When I was young, we would travel by train across the prairies to visit my grandparents in Winnipeg. My dad worked for CN and we would get some sort of break on travel costs, and those were the days when train travel was still economical.

I have a freight car full of memories of those trips, the stations, the stops, the food, the smells, the sights of sunsets out the window, the board games in the observation car, the thrill of getting a new book to read for the voyage.


But one of my keenest memories is sitting in whatever vehicle my uncles were driving that day and heading out of downtown and out to the north end. But before we got there, we drove over  a bridge and from that bridge (my dear Winnipeg friends suggest it was likely the Salter Street, but maybe the Arlington) I could see, for the few seconds before we hit the other side, one of the most marvellous sights I have ever taken in: those beautiful rail yards.

It was a silent thrill -- I didn't have the words then, I am trying to marshal them now -- to take it in. Cars standing on tracks, cars being switched, the sky, the tracks, those endless tracks.

To this day, I am drawn to rail yards. Not to work, of course. My career on the railroad lasted for about a week, before I got a job writing. But I still take detours to drive by the old Calder yards. It's  not just a fascination with the cars and the engines and the tracks and the light at night and the sound of trains. There is also a vague and fleeting sense that there is some connection between a tanker car and a word, between a flatbed car and a word, between a train and a sentence. Explosive words. Mundane words. Words that go off the tracks sometimes.

When I say I want to find the words for trains, that's what I mean.

I am trying to better understand why I also love the printed word, the look of sentences, fonts, type, and books, and I wonder if that love has something to do with the straight lines that are railroad tracks. Or, is cause really effect? Does my love of rail lines come from the habits of reading words that are fixed on lines that move from left to right across the page?

Tonight, I am reading Orality and Literacy by Walter Ong, and over pages 119 and 120 (that brief stint on the railroad was as a car checker whose job it was to match the numbers on the cars to a manifest that showed the proper order of the train) he is explaining how intricate and noisy was the craft of aligning moveable type faces on a printing press, an understanding of which is hardly needed to read or make or love books today.

Writes Ong: "Most readers are of course not consciously aware of all this locomotion that has produced the printed text confronting them."

All this locomotion. Now, why ever would he pick that word to keep the sentence rolling? These are the things that keep me up at night! 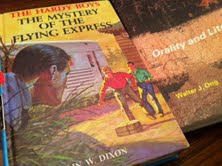 Perhaps, taking a train from New York City to DC would help! More to come.


(Thanks to Erin and Bill, great Winnipegers, for helping me try to keep my thoughts on track.)

********
It is January 5, 2013, and I have just read this from James Carney in "A Cultural Approach to Communications" in Communication As Culture:

Our basic orientation to communication remains grounded, at the deepest routes of our thinking, in the idea of transmission:  communication is a process whereby messages are transmitted and distributed in space for the control of distance and people. (13)