Trust In Me When I Say!

April 24, 2012
Ong's thoughts on orality take mine in a lot of directions, including to Las Vegas.

In Orality and Literacy, Ong shares many examples of the persistence of the oral state of mind and its practices, habit, instincts. 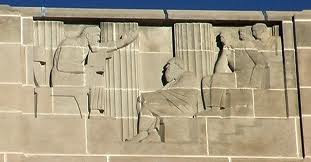 Witnesses were prima facie more credible than texts because they could be challenged and made to defend their statements, whereas texts could not (this, it will be recalled, was exactly one of Plato's objections to writing. ... Written documents themselves were often authenticated not in writing buy by symbolic objects (such as a knife, attached to the document by a parchment thong...) (p. 95)


Somehow,  this account of medieval society transported my thoughts to the Palazzo in Vegas and into the Jersey Boys theatre. In the play that tells the story of Frankie Valli and The Four Seasons there is a scene that depicts the heart of the group. It is an oral agreement, sealed by a gesture, a handshake, between Valli and musical partner Bob Gaudio. And the content of the agreement was, is that Bob would give the band's namesake half of everything Bob made as a writer and producer. For his part, Frankie agreed to give Bob half of Frankie's haul from performances outside the group. 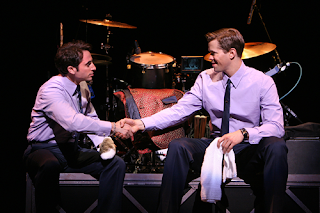 It's neat: inside a musical is an oral, non-textual agreement that is presented as being stronger for the lack of the written word,
Bob Gaudio Frankie Valli glenn kubish Jersey Boys mact plato Walter J. Ong