Earlier this NHL season, quietly, teams started to experiment with a new form of advertising. It features a company's digitized logo superimposed not on the ice or the boards but on the back glass. Looks like: 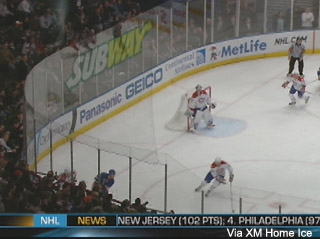 Greg Wyshynski, writing in a Yahoo Sports article, raises and then backs away from the possibility that the new advertising somehow crosses a line. He asks: What makes the glass more sacred than centre ice? The use of the word sacred is a clue to Wyshynski's opinion. After all, not many anymore argue in favour or something because it is sacred.


But, it's worth starting to think about. It does feel different. It's not like text on a page in a book where the page has a presence that is somehow more real than the letters printed on it. Sure, the back glass in a hockey rink has substance, but it is also transparent, not there, ethereal.


Recently, not quietly, Google has unveiled its Glasses initiative, a reality dream in wearable technology that changes what and how we see. The research sets the stage for the obsolescence of the hand-held cellphone, as touch surrenders to sight. Feels like:


What I find intriguing is what happens to the sky at the :15 mark. Essentially, it is recreated as piece or end zone rink glass onto which is projected an icon of information. In the video, it is information around the current temperature, and that may feel innocuous. But the sky has changed. Is it hard to imagine seeing an Apple logo when you gaze up at the heavens? A reversal of gravity, as the apple, with a bite removed,  ascends to the sky? 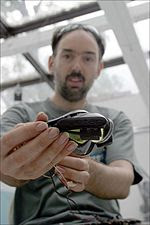 Anticipating a question from Steve Mann, whose book, Cyborg: Digital Destiny And Human Possibilty In The AgeThat  Of The Wearable Computer, I am reading, I wonder if Google Glasses could be used to stop seeing advertising?

I admit it: there are more Ian Tyson lyrics going through my head than the average person's. And what I'm hearing now, as I consider rink glass advertising, non-textual messaging, Google's taking over the sky, is, literally, the wonder of it all.


In The Wonder Of It All, Tyson muses on  the sense of sight, the passage of time, and the seeming inviolability of the sky:


And, yes, you do wonder if someday soon we look back fondly to the old days when the sky was just the sky, free of the barbed wire of advertising.