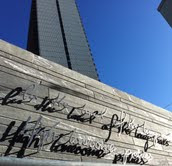 In the land of the long roads/
High lonesome prairie/
Dreaming of the springtime/
First crocus in the snow/
Coffee in a go cup/
He's heading for the old rigs/
Land of shining mountains/
Big Alberta sky.


Those 37 sculpted words from Ian Tyson's Land of Shining Mountains are attached to a stone wall near a C-Train station near 7th Ave. and 9th St. SW in Calgary. The words are raised, so they produce shadows.
Tyson's songs are great, and his best are the best, but they, when performed or listened to, they exist in time.

All around is motion and sound as trains stop and go, workers criss cross, jackhammers ring.

The tribute in text somehow seems still and pure.

Until you consider that words are not, in the end, visual, but have to be related somehow to the world of sound, the natural habitat of language, to yield their meaning. This is the Ong (Orality And Literacy, p. 8) in the song that is Tyson's language.

In a song devoted to visual Alberta (long roads, crocus, go cup, mountains, sky, Oldman, Castle, Red Deer, Battle, cities of the plains, etc), the bridge is turned over to the aural.


In the night, I have heard the thunder roll

And then the spoken word inside the song.


Like the cowboy said, "I wish I'd seen the buffalo/
"Maybe they'll come back again."

I left the Tyson monument with text in my eyes, music in my head. And a thought that the best way to fail in trying to freeze sound is to revert to text. Says Ong: "Sound exists only when it is going out of existence. It is not simply perishable but essentially evanescent, and it is sensed as evanescent." (p. 32)

It turns out that Ong, like Tyson, is fond of the buffalo and of sound.

Sound cannot be sounding without the use of power. A hunter can see a buffalo, smell, taste, and touch a buffalo when the buffalo is completely inert, even dead, but if he hears a buffalo, he had better watch out: something is going on.