April 02, 2012
I have been thinking a lot about driving these days. In part because we're driving a pretty nice car these days. It's a ten year old BMW 330i, it's gold, and it just makes you enjoy the ride. It belonged to Eleanor in the days she was still with us, so we remember her, too.


I'm also thinking about driving because of an article in a recent edition of Wired. It's called "Let the Robot Drive: The Autonomous Car of the Future is Here." Well, it, and its promise of "no traffic jams" and "no crashes" isn't quite here.

On the way home from work today, a pedestrian darted out of the shadows and started across Jasper Avenue. I had time to react, but I wondered if a car radar or laser system with the brainpower of a computer system that could predict the movements of pedestrians would have given me more information than my own eyes and brain did.

Then, coming down 142 St.,  I saw a young person lying on the road, covered in warming blankets, a victim of a car collision, being attended to by passersby until the ambulance arrived.


It was an eerie scene. The asphalt is not where a person should lay motionless

The Wired article makes you think if, somehow, the driving paradigm could change. What if driving stopped being a narrative that belongs to those who value freedom and mobility, and started to be a problem to be solved by hackers? Or, maybe, that is exactly what is happening in our society, on a lot of fronts, as the logic of computers suggests itself? forces itself? into other spheres?

As drivers, who are we?

We have had to deal with this question lately as society has debated the distracted driving laws.

As drivers, who are we? We strap ourselves and lock ourselves into the machinery of the automobile. Are we not, in some way, machine? And if we are, how are we to be regulated? And what is the price to the human who unbelts after the drive? 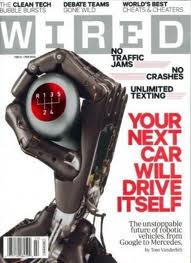