A silly streak in us 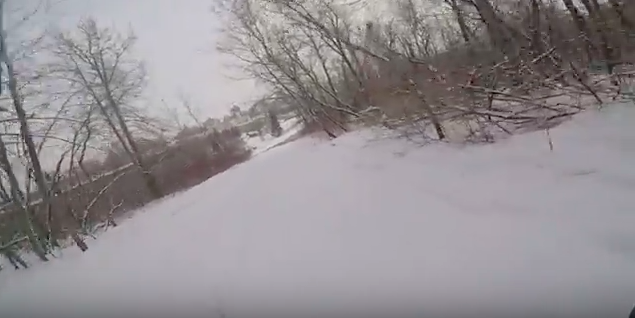 The front tire wasn't a front tire as much as an oversized windshield wiper clearing snow from the glass. The transformation was rapid, and complete: Now I was pedalling down a riverbank utility road, and now I was thinking how lovely it is when the brown city gets a fresh set of linens, and now my front tire was skidding across the ice hidden beneath the snow—and now I was clearly falling.

And now, sitting propped up on an emergency room stretcher, I was signing my name to a form without lifting the pen off the page before things went black under a veil of fentanyl and propofol.

The scan shows the dislocated shoulder bone  back in place (it looks like a pork chop) and the chunk of bone that fractured off.


Here is another view inside: 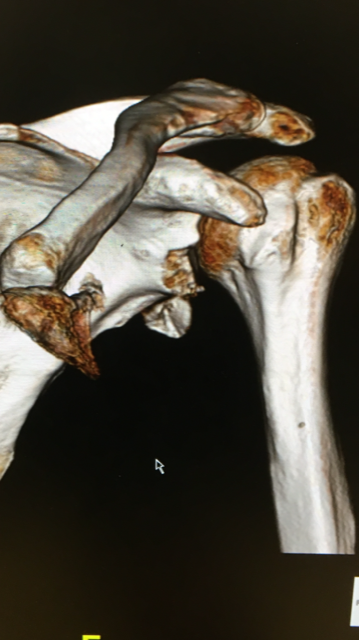 The fall happened on March 30. I was riding back home with a friend from a meeting of Coffee Outside. For more than three years a growing group of bicycle commuters in Edmonton have met on Friday mornings in all weathers and temperatures, usually in Faraone Park by the High Level Bridge, to say hello and talk about the things we have in common—the love of riding in the city, the obstacles that test that love, and coffee. Steffen and Chris bring tea, but they are outstanding fellows, so we don't judge. Darren has retrofitted his cargo bike into a rolling coffee machine. We call him the handlebarista. Karly has the stories and timing of a standup comic. Everybody is remarkable. I always pedal off to work after Coffee Outside grateful that I've fallen in with a band of beauties who ride bicycles, in part, because bicycles are so easy to stop and so easily frame conversation.  Coffee Outside is a support group. It gets in you, even to the point that it was unthinkable on March 30, the statutory Good Friday holiday, to sleep in and miss spending time together.

I had pedalled a bicycle for 278 consecutive days, a streak stretching back to the end of June last year when I had decided, for no reason other than the calendar exists, to try to ride a bike each day for 365 days in a row. Okay, there were three other reasons. First, I wanted to demonstrate that bicycle riding in Edmonton wasn't just a May-to-September proposition. Second, for myself, I wanted to see each day as kind of non-renewable resource. Under the slowing influence of Coffee Outside or not, I was feeling the days whipping by. Whipping by like the sound of O-Pee-Chee hockey cards through the spokes in my green bike's back wheel growing up in the northeast end alleys. So the idea, back on June 26, 2017, was to write each day a thought thought bicycle riding, and to add a photo or a still from my handlebar camera.


Of course, recording the days in graphite and paper and pixel didn't make the days go by any slower. But there is a consolation in being able to recall a fragment of July 3 or November 26 or  February 9,  in re-membering what time has torn apart. It's like standing in front of a tombstones of my days and at least knowing I was alive and aware and grateful for specific things and people on July 3 and November 26 and February 9. You never forget how to ride a bicycle, but everything else is up for grabs.

July 3: Holiday Monday. I pedalled to the Sugar Bowl to meet Spell and Fitz. I wanted to show them the downtown bike network, and to laugh. Missions accomplished. "I can pedal [the two minutes] over the High Level Bridge, but then let's stop for a drink at Cracker Jacks!" Spell said of the new wave dance club closed for decades.

November 26:  I stopped on the snowy footpath in Laurier Park to watch the chickadees.


February 9: "Take my bike," Pekka said as we walked along the Moscow River. It was a happy group I was part of during the World Winter Bike Congress. We had spent a couple of hours together listening to Pecha Kuchas in a bar under the Krymsky Most. Pekka pointed. "Ride across the bridge and then look out at the view. We'll wait here until you get back."

This was the streak kept alive on work commutes and weekend errands. It kept going during time away spent in hideouts from Banff to Prague. The streak maintained its unbrokenness on days with rain and sun and snow and wind and dark. But it broke for good on March 30 along with a piece of my left shoulder. And a piece of my heart. I was sad. That's the truth. I loved the watching the notebooks fill up with fragments of days I would never be able to recall without pickling them in words and images. I loved piling up the Atoma booklets and squaring them and putting them back on the shelf. I had managed to put time in space.

I announced the end.

The idea to include a call to action in the Twitter post was Darren's. He was the friend riding with me the morning of the fall. He said people would pick up the streak. Darren has a lot of good ideas. You can see one of his good ideas in the Go Pro video of my fall. His good idea was to take the less icy path down the  hill and not fall.

(When I play the video back and see that shiny scene and hear myself laughing like a boy and knowing now that in exactly 16 seconds I will be in agony in the snow, I hear Lysander in A Midsummer Night's Dream pretty much nail it.

And ere a man hath power to say "Behold!"
The jaws of darkness do devour it up.
So quick bright things come to confusion.)

The reaction to the Breaking News post took a little more of my heart with it. Friends started sending pics of their bike rides, or, in the case of the first pic sent, of reasonable facsimiles. Stacey's pic counts because she is moving outdoors in winter and because she has agreed to ride the bicycle network with me.


I am a very fortunate recovering bicycle crasher. After the fall, I received everything I needed when I needed it. A friend with good ideas who got me to safety, and my bike to safety, too. My wife who got me to the hospital and stayed by my side and brought me a hamburger and lobbied for more painkillers. Healthcare workers who have seen way worse but knew I hadn't felt any worse. People who have sent me messages or books or just asked how it's going. People who gave me Percocet.  And my friends who have stopped in their rides and in their days over the last month to keep the streak alive in a bigger way.

Sure, it's a silly streak. But it got meaningful when it wasn't just silly me. It got real when I watched take shape the third reason for the streak. And that was in realizing this: we fall alone, and we get back up together.

Ride across the bridge and then look out at the view, Pekka said.

We'll wait here until you get back.