My only point is I rarely get things right the first time. And by things, I mean just about anything.

I didn't see the arrow between the E and the x in the FedEx logo until it was pointed out to me.

If I try to build anything, repair anything, my first technique will be wrong.

My first prediction about the severity of Sandy? Not quite right.

Try to run without IT band pain? Won't work the first time.

Let's say I'm in a gentle argument with Shelagh. Crazy, I know. But  what I do know is the first thing I say will be wrong.

This afternoon, more proof of the law wrongevity as I rode home from Revolution Cycle on new winter tires. I had forgotten that I would be given back the summer tires, and, with Michael safely on his automobile ride back home, I would have to haul them back while sitting in the saddle. In the scheme of things, agreed, not an epic engineering task.

I don't know how I figured out that a better way to transport the tires would be to position them so that they were anchored by my shoulders, but that did the trick. A small innovation born from somewhere after the same error produced the same results.

There is a deeper message here somewhere, but, for me, it's a reminder of a couple of things, one of which I have already forgotten. But the other point is that I get things wrong the first time, and I shouldn't be overly attached to the first version of anything. And that there should be a second and third version.

And fourth. Measure before cutting. That kind of stuff. 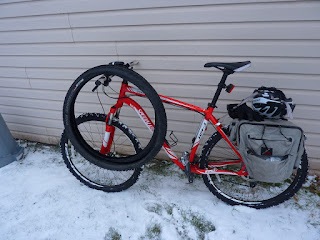