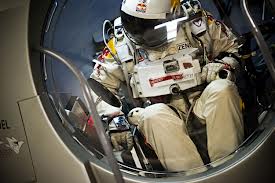 Felix Baumgartner sat alone in a balloon-lifted space capsule and, for about two-and-a-half hours, rose above the scrubland of New Mexico. When he got to about 128,000 feet, he went through a 30-point checklist, waited for the air pressure to rise and open the hatch door, and walked onto a balcony about the size of a skateboard. And then jumped back to Earth.

He fell freely for more than four minutes before he deployed his parachute. In the process, he became the first spaceskydiver to break the sound barrier. He hit a top speed of 1342 kmh. He fell 38 km. By my math, that's roughly the distance between Edmonton and Millet.

And he landed on his feet. Such was the ultra-stunt sponsored by energy drink maker Red Bull dubbed Mission To The Edge of Space. Indeed, Baumgartner was no regular astronaut. Instead of his country's flag emblazoned on his spacesuit, he had the Red Bull logo. For those wondering what the future look of space might be, today we got a peak. It looks a lot like the advertising back here on Earth.

That wouldn't surprise another epic traveller, the beautiful creation of James Joyce:  Leopold Bloom. There is a scene in chapter 8 of Ulysses where our hero, himself an advertising copy man, threw from the bridge above some cake crumbs into the Liffey below. The gulls swooped for the morsels and Bloom saw a tethered rowboat on the side of which was an ad for a tailor. He got to thinking and connecting some thoughts:


How can you own the water really? It's always flowing in a stream, never the same, which in the stream of life we trace. Because life is a stream. All kinds of places are good for ads. That quack doctor for the clap used to be stuck up in all the greenhouses.

It's hard to use a hip restaurant urinal these days and not think of Bloom when you see an ad in it. And it's hard not to think of Bloom when you see a Red Bull ad in the stratosphere. Yes, from the porcelain white of urinals to the edge of black space, all kinds of places are good for ads. Bloom got it. You wonder if Google glasses will soon give us the ability to project ads onto that vast untouched monitor called the sky? 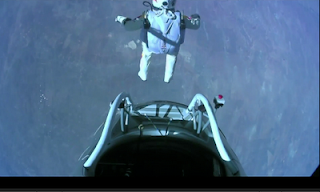 The corporate sponsorship did give us something marvellous, though, and that was the livestreamed event itself. Cameras in the capsule, on the capsule, extended shots from earth, shots from helicopters, cameras in mission control, cameras on Baumgartner's waiting family, a video crew with boom mic on him within seconds of his touchdown.  It was a stunning display of live media that delivered a sense of being together around the same fire, listening to the same story.


Even with that technological storytelling apparatus, the jump from the edge of space may not have been the most chronicled fall of man to date. But, in its way, it was somehow an echo. Maybe, it was mission control's assurance to Felix in the seconds before he fell back to Earth that "our guardian angel will take care of you." 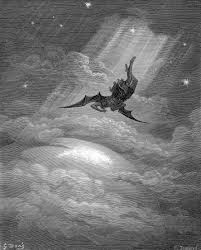 What a lark, what a plunge, indeed!