Rivers Run Through It

October 03, 2012
Edmonton Journal reporter Elise Stolte has asked her readers to share their favourite memories of the North Saskatchewan River. Or a favourite picture or hidden beach or a cool spot on the river that is so big and quiet we always miss it.

My favourite memory of the North Saskatchewan River hasn't happened yet. I mean, I know what it would be, but it just hasn't occurred. Maybe it's not possible. Maybe it's not cold enough.

But I do have a favourite photo, so far. Here it is: 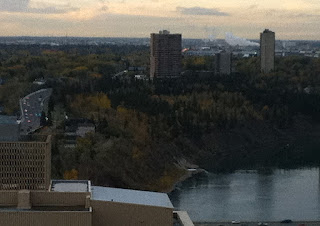 This is the view this morning from the 16th floor of ATB Place in downtown Edmonton where I work. It shows two rivers, two flows, one of traffic on 99th St., one of water. There are many days when the water is moving faster!

I love the shot because it won't let me stand still. Am I in the present, the tense ruled by the automobile, or am I in the past, when the now-forgotten waterway was the channel of transportation and commerce? It's the water that brings a fragment of a passage from T.S. Eliot into view:


I do not know much about gods, but I think that the river
Is a strong brown god.

That is as much as I can recite from memory. There is something next about sullen and intractable. And then something about the river becoming only a challenge to engineers. And then a line about how it is forgotten by those who worship the machine. It's worth creating an eddy of time in your working day to read the whole passage. It's from a poem called The Dry Salvages, which is one of Eliot's Four Quartets. (Google confirms I got part of the first line right!):


I do not know much about gods; but I think that the river
Is a strong brown god -- sullen, untamed and intractable,
Patient to some degree, at first experienced as a frontier;
Useful, untrustworthy, as a conveyer of commerce;
Then only a problem confronting the builder of bridges.
The problem once solved, the brown god is almost forgotten
By the dwellers in cities -- ever, however, implacable.
Keeping his seasons and rages, destroyer, reminder
Of what men choose to forget. Unhonoured, unpropitiated
By worshippers of the machine, but waiting, watching and waiting.

I've long loved those dark words that seem to go by in the rhythm of the river, even though they are now more frightening than when I first read them, what, 25 years ago as an undergrad. They seem to have something to do with my death. I think about them whenever I glance out the window and see those two arteries, one pumping wildly, composed of the steel-encased purposes of everyday life, the other somehow passing judgment on those same actors and their plot-driven stories.

And what about that favourite memory, the one that hasn't happened yet? Here it is: in the middle of winter, and if the water on a section of the North Saskatchewan River ever froze to the level of safety, I think it would be cool to play hockey on that same river ice. Make it a big, outdoor 3-on-3 tournament with a bunch of games going on at the same time. Lotsa yelling and cheering good times. No lockouts.

I don't know if it's possible, but I keep seeing it. In a photo. From above.