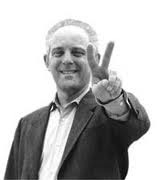 I met him in the early days of the Edmonton Bicycle Commuters. I got to know him a little better when I was a city hall reporter for The Sun. He crossed all kinds of lines, the first of which was refusing to wear a tie for his city council portrait. He leaked documents to me. He was sort of a one-man Fringe Theatre at City Hall. Stubborn. Inspiring. He pushed buttons.

Long before it became popular to ask dumb questions in the service of innovation, Tooker asked dumb questions. Why can't we somehow capture industrial emissions to heat downtown buildings? Why can't we put bike racks on the front of buses? Why can't we skate to work? Do you really know how much of a subsidy auto travel gets? And on and on. He was good for news, that's for sure.

He had what used to be called demons and jumped off a bridge to his death in Halifax about eight or nine years ago. I don't think his body has ever been found.

This blog post isn't a confession that my views, with the passage of time, now line up with his. It's just that there are not many politicians these days who start sentences with some version of, "Wouldn't it be great if we did....?" Or, "Do you think it would ever work if....?" Or, "Why the hell are we doing this?"

Put it this way: I don't think Tooker spent a lot of money on public opinion polling.

And as I cycled home from work today and wondered if all the excess snow from the roadway and sidewalk really had to be shovelled right next to the curb,  as if there were no cyclists in the winter, I wondered what Tooker would say, do about it.

What I did was get off the main thoroughfare and zigzag my way home through the river valley. I had the trails to myself.

After I blogged the above it was back to Twitter where I found the good Councillor Kerry Diotte making the case against spending $362,000 on developing a winter city strategy that would purportedly make Edmonton a world-leading winter city. Now, there are all kinds of bells that go off when people who want money use any version of the world-class-city-adjective shortcut.

Kerry warned that the money, instead of helping build rinks or toboggan hills or get disadvantaged children outside and into winter activities, would go to bureaucracy. And he made some good points you can find and respond to here.

But he also fired some verbal artillery at those not protected by a ton of steel and glass.

Goal 2 of this WinterCity strategy is to, "Improve Winter Transportation for pedestrians, cyclists and public transit users."
What about improving winter transportation for motorists? How come they're left out of this strategy?

And I thought, why is it forgotten, or not realized, that my thin line of a curb lane disappears into dark and ice and slush come winter?

And I thought I miss having Tooker around.