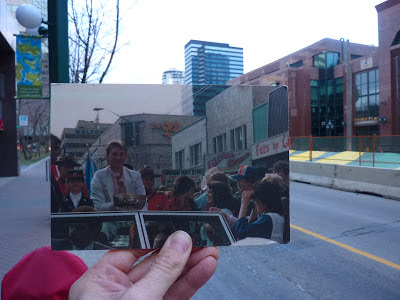 This morning I took this photo of Gretzky (in happier times :) -- I mean I physically took the photo -- and, adjusting for a few decades, re-placed it in its original location. It's an archeology, of sorts, that consists of literally laying the past over the present to obtain an effect of the passage of time or, what is probably more accurate, the jumble of time.

Now, I didn't get it right, or as right as the artists behind sites like FILMography, which can be unearthed and marvelled over here. But there is a common fascination with memory, the intersection of time, the dance between visible and invisible and other themes that drop in and vanish just as quickly.

It's also a fascination with the photograph as an artifact. A photograph preserves a memory and it is then itself preserved in an album or a shoebox, inside a frame, behind glass, in a wallet, locket, purse, or between the pages of a book.

But when that photograph itself is freed and is taken back to the spot of its taking, some interesting thoughts and feelings can develop on the spot.
edmonton FILMography glenn kubish photography wayne gretzky