The Philosophy Of Jon Stewart Bill

October 06, 2012
As a live streaming experiment, Rumble 2012 between Bill O'Reilly and Jon Stewart was a failure, according to some of the loud, early online reviews from those angry they paid $4.95 for an Error 404 message.

(It took me about 10 minutes to get into the stream, my issued url being a dud. At times the stream froze, which is natural around this time of the year in Edmonton, but unacceptable in this, as they say, day and age.)

But looking past the obvious technical problems, the experiment in bringing together the top editorial-comedic-analytical-social guns from Fox News and Comedy Central made for an informative and entertaining evening. Neither of which adjectives could be applied to the first presidential debate.

Funny, for sure. Here is Stewart invoking the shade of Clint Eastwood. 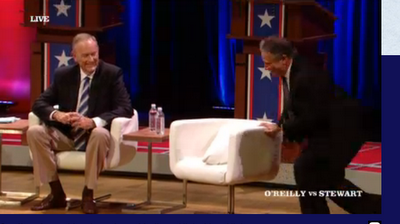 It was poignant. Asked who his political hero is, O'Reilly made the case for Abraham Lincoln, the leader who wracked his own body and wrecked his own life in the service of the Union. For his part, Stewart offered the life and work and legacy of Robert F. Kennedy.

Stewart made a plea for the sense of service that informs the military to come alive in a public health care system; O'Reilly said if it's one thing the government cannot do is organize health care.

One of the embedded messages in the debate was that those who argue from opposite poles on the political spectrum can still come together, even in these fractured times. (Stewart would disagree, saying all Americans are socialists, it's just the tinge of red that is in dispute). Now, there may be other motives or incentives that brought the two together, but each enjoyed being tested by the other and having to clash with what was just said. That's a different thrill than delivering rehearsed lines.

But what I will remember was the sad note. It was an observation from O'Reilly that capitalism drives the hate we hear from many political commentators in the United States. And that a hater can get rich spewing opinions he or she doesn't even believe. And that some people on the other end of those broadcasts want to hear hate. A deplorable condition that isn't going away, and must be accepted, he said, in the name of freedom of speech.

It was sad, but there is some value in naming hate as hate. And then having a laugh together. Somehow, some trust is produced.

The event was an exercise in what's called, or what used to be called, expressive communication. In contrast to instrumental communication, the expressive variety happens when individuals are "primarily motivated by personal or social aims such as sharing experiences, indicating agreement, being humorous, etc," say the authors of a paper I am reading for a grad class. The theory, according to those authors,  is expressive communication builds mutual trust.


The importance of mutual trust in coworkers may not be evident if people in an organization are all following a procedure that works. However, in times of change or breakdown [my emphasis], mutual trust will allow collaborative effort to proceed toward organizational (as opposed to individualistic, locally optimized) goals. *

You got the sense from watching O'Reilly and Stewart that both those geniuses in the art of reading American public opinion got the sense that these are times of breakdown in the organization that is the United States, and that there is not only a monster fiscal deficit but an equally dangerous deficit in social capital and goodwill that has to be dealt with. They did it their way. 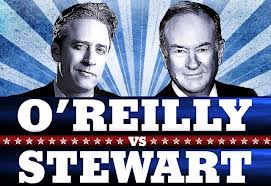