Light it up, #yeg 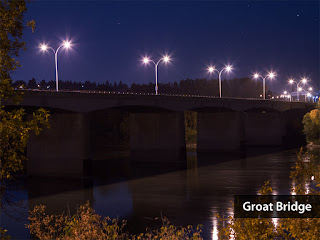 It remains to be seen what will become of Dave Mowat's idea to illuminate the bridges of Edmonton, achieving for each a signature look and for the city a sense the dark will not overcome the light. But it sure feels like a brilliantly simple win. Who, asked Mowat at Pecha Kucha Night 14 in Edmonton last week, has ever seen a postcard or stopped to take a picture of the Groat Bridge at night? Case made, case closed. Here, thanks to the PhotoShop work of Neil Graham, is what the bridge could look like with a few strands of eye-catching pearls added: 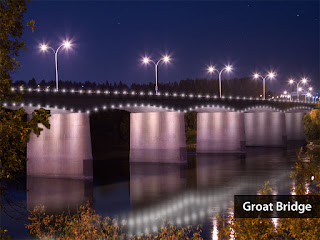 The massive High Level Bridge will next year mark a century of standing there, quietly linking the once-separate communities of Edmonton and Strathcona. It is a channel for vehicle, pedestrian and bicycle traffic, and has a streetcar rail running along the top platform. At night, it is an accurate reflection of Edmonton in the autumn and winter. You can't see it. 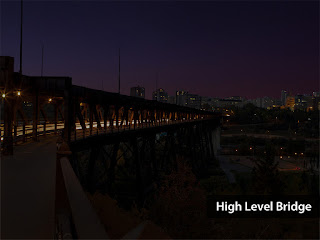 But what if, besides being lit for utilitarian function, it was lit for contemplation and, okay, say it, joy? What if the dark moved into the background and became a frame for the light? Here is the high-level attraction it could start to become: 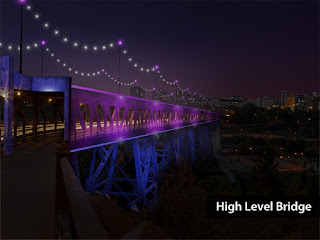 The merit of the vision is starting to come into relief. And it turns out it doesn't have as much to do with bridges as it does with people. Here is the mighty Low Level Bridge: 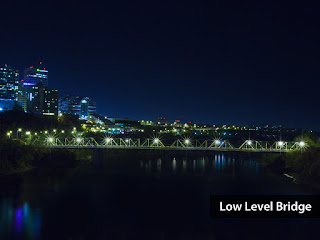 And here is the recast Low Level Bridge infused with the spirit of the Northern Lights: 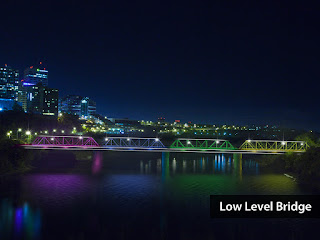 The bridge and the laws of physics that allow it to convey traffic from one side of the river to the other have not changed at all. The equations that keep it standing and keep automobiles elevated remain as they have been. What changes is the sense of light inside the viewer who re-imagines the span. And that is a form of making just as real as that pulled off by the architect, engineer, welder and bolt fastener.

Light can do that.

Bonus pic, video: Mowat punctuated his Edmonton NextGen Pecha Kucha presentation with an exclamation of light as he grabbed his crutches from the stage (broken ankle) and flipped a couple of toggle switches that had been, along with a string of lights, wired onto the crutch frames (Brian Haydey). The crowd enjoyed it.


Light can do that.


And as he left the Horowitz Theatre, this exhibit from Mowat on those same crutches, bridge pillars, really, moving from here to there: