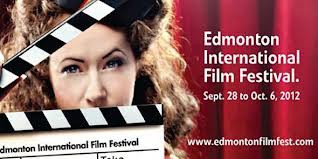 There's a lot of reasons to put your hands together and clap for the Edmonton International Film Festival.

The experience:  It is an adventure to head back downtown and watch Midnight's Children on a Wednesday night. It is fun to see what local filmmakers can do with 24 hours, a choice of two genres and a bag of marshmallows. It's a blast to head over to the Empire Theatres and catch a handful of shorts over the lunch hour. It's neat to have a moviemaker's sensibility linger in your imagination as you walk back through the mall and watch the little movies happening all around you.

The thrill: A giant screen with a moving picture and sound right there in front of you is still a new world. And it's still rattling like nothing else to walk out of the twilight dream of the theatre and into the sunlight of reason.

The movies are great. They show you the world from the perspective of a boy in elementary school who has a crush on his babysitter, a girl who tries to convince a fellow patient in a waiting room that grass will not grow out of his chest if he smiles (she was wrong), a cab driver who has a decision to make with a dead man lying on the road in front of him.

The festival is where the film Good Karma $1 finds you. It's about an ad exec who comes to appreciate the complicated and sophisticated communications methods used in the cardboard signs used by homeless people. It becomes a meditation on generosity. And it is a reproving reminder of what can be done in 15 minutes.


I will remember all of that. But, what is really neat is how the festival audience applauds after most every screening. That doesn't happen much at movies anymore.

I asked a buddy I ran into today at the lunch hour screening why we clap. He said it had to do with gratitude, basically. We give thanks through the convention of clapping for the commitment to unconventionality that these filmmakers make. It's not formulaic Hollywood. It's not safe. You don't feel that your reaction had already been predicted by an algorithm. And, so, we send thanks with our hands for what they made from their hearts.

To which I would add only that the sense of clapping together puts an exclamation mark on the brief community in time that a movie house audience is. We agree that it was worth our time to do that most rare of things: sit and watch and say nothing. We don't tweet or Facebook our reactions as the scenes unfold. We take it all in, we consider, and we realize that what we've just been given affirms our individuality.

Each individual who feels that way claps, and, I guess, we figure out by the sound that we're not alone.