August 08, 2012
Okay, I'll ask the question. Why is Olympics viewing so addictive? I mean, this morning, if you were walking down our front street wondering about the blue flickers framed in our picture window, yes, that was me inside watching Olympic horse jumping. At 5:30 am.

And, as always, Michael provides a perspective that is of little value -- until you think about it a bit.

"Dad," he said tonight when I put the question to him, "the Olympics are addictive because they are the Olymprocks." It's a reference, of course, to a plot in The Flintstones, which Mikey is too young to remember.

There are many reasons why the Olympics convince us to watch.

The athletes are beautiful, and seem to be getting beautifuler. The story persists that the athletes, being amateur, or amateur at heart, are a more pure version of the sporting personality. The television is spectacular, especially in its use of super slo mo, making it a joy to watch. It is an opportunity to see different people, different-looking people, in different colours. The events are loaded with emotion. A race is a pure story. It is a chance to cheer for Canada without flying to Ottawa for Canada Day. We are actually getting to know and respect sports other than hockey. There are poignant stories of determination. Some of the commercials are fun to watch. It's fun to do your imitation of Brian Williams talking to his director and calling for a live shot of the scene in Trafalgar Square. Or: "Tell me about courage." It's just plain fun to say Adam van Koeverden. It is thrilling to hear O Canada. It is inspiring to see athletes with tears in their eyes standing on the podium. There are words, like repechage and keirin, that you hear only during the Olympics. The feats of strength and speed push some to do their own best in their own small ways. Seeing the sights of London, Beijing, Athens, Vancouver, Calgary can be awe-inspiring. And on and on.

But there is one other reason that I am wrestling with, and it has to do with knowing the Olympics are on, and simply being able to look forward to watching them with friends or family, watching together.

There is a desperate attempt in the conventional media to find stories, events that compose that elusive mass of viewers. Royal weddings, Olympics, natural disasters, gargantuan crimes are about all that's left. For the broadcasters, these events guarantee the eyeballs that advertisers covet.

But it's also kinda cool to be part of a mass that isn't a mob.

Yes, Mikey, the Olympics rock. You are right. 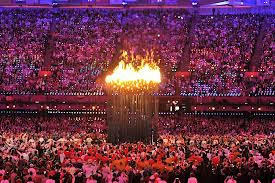