It was thrilling. Hundreds of cyclists took over the streets of Edmonton, moving en masse through red-lit, corked intersections, across the suddenly carless High Level Bridge, down Whyte Avenue as pedestrians took photos, waved, pointed and wondered what was going on.

It was political. In the microphoned messages in the air over Churchill Square, where the ride participants gathered before setting out, were the exhortations to phone or text your politicians to make the roads safer for the cyclists.

It was solidarity. "This is amazing," a fellow cyclist told me as we rolled down Whyte Ave. toward the memorial. "Usually, the critical mass rides get four or five people. I'll never forget this."

It was a generational gear change. Alex was working. Mikey was with his buddies at the bar. And Shelagh and I pedalled along with the hundreds of others in memory of a young man we had never met. "We're bringing up the average age here," Shelagh smiled.

It was social science. "Who's gonna lead this ride?" "How are we all going to stay together?" "If we run the red lights the drivers who already hate us will hate us even more."

It was beautiful. What a gentle-aired hour to be out on your bike, what spectacular late August light, what a feeling of nothing between your head and the clouds, what fragile, evanescent sounds of rubber tires on the gravel and asphalt.

It was different. With riders blocking oncoming traffic and police cars stationed at key intersections, there was a sense of car(e)freedom very different from the pedal-to-pedal apprehensions of cycling in automobile traffic.

It had a soundtrack. Of handlebar bells and handclapping:


And it was very sad. 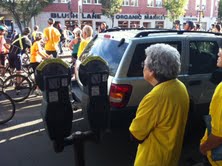 What brought us all together was the death of young university student Isaak Kornelsen, killed on Whyte Ave. and 101 St. on Monday in a collision with a cement truck. It is said no one is to blame. Isask was a scholar (he took a Greek philosophy class with Alex. We know those are special kids!). And he was an athlete and, by the reports, thought of highly by all. It was sad to stand over our bikes at the ride's endpoint, the makeshift memorial on the Whyte Ave. centre boulevard, and see his grandparents watching the scene, friends hugging, many still so bewildered. It was sad to overhear a university professor tell Isaak's grandparents what a pleasure it was to teach him.

But mostly it was sad. What a disproportionate outcome to a split-second situation most cyclists have faced and lived through. 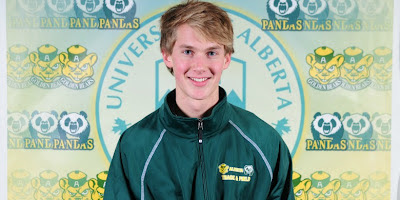 Thanks sounds thin, but thanks to Isaak for bringing so many together today, even briefly. Ride safely.