August 02, 2012
Higher, stronger, faster are the three words that guide the efforts of Olympians, but, for the television storytellers at London 2012, it's more like higher resolution, stronger effect, and slower. Much, much, muuuuuuch slower.

Slow motion is everywhere in these Olympics. We have mentioned this before (May 22, 2012 blog "Slow Down, You Move Too Fast), but it bears a quick review. 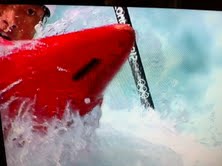 The technology has advanced to the point where video almost surrenders to the medium it pushed aside: photography. And, so, now we see the bead of perspiration, the droplet of water, the look of determination. And all in HD. It is brilliant.

We can see with the eye of the expert. If those synchronized divers do their water-bound artistry too fast, we can see where the one on the right actually came out of her pike a little too soon. In field hockey, we can see the stick laid down to set up the penalty shot. In water polo, we see the leg kick that moved the ball up to the player's hand for the shot on net. And on and on, in and in. Golf does it. Hockey does it. And more and more advertising is doing it, as if the pace at which an image is presented forces a similar gift of time from the viewer.

Slow motion and super slow motion are in the rhythm of what we see, and what we expect to see, as an  athletic move, or any move, is immediately analyzed to the near still point. In some way, the logic or writing returns to the presentation of the moving picture.

It reminds of me of how we think about the past. If we experience the present as a series of streamed images, we live the past through photographs. In the past, we can hold a scene or an episode still and examine it from every angle, manipulate it, dissect it. That doesn't seem possible when we are in the middle of that same scene or episode.