The news was sitting, waiting for me on my iPhone in a message from my buddy, Dan, who has had to suffer hearing many times what the story of the first man on the moon means to me. Dan was there at work the day my $100 lunch kit from Amazon arrived.

Rewind to the late 1960s and picture yourself in the kitchen of a new bungalow in a new neighbourhood at the edge of north Edmonton. Mom, aproned, yellow-rubber-gloved, is working over a nifty, new double sink, cleaning dishes, rinsing dishes, and piling them on the counter in a left-to-right, two-armed assembly line.

Now, look down just to her left at the closed door of the utility cupboard And listen. Because you might be able to hear the young, imaginary astronaut inside. He's about a 6 or 7 years old and he's sitting on a pile of old Edmonton Journal newspapers that serve as his cockpit seat. In front of him is a kitchen plumbing pipe re-imagined into an oxygen supply system. At his feet are what look like conventional kitchen cleaning products, but, for him, are galactic flight instruments. They give the  cupboard a chemical odour he imagines to be the smell of an Apollo space capsule. It may appear the young astronaut is by himself in this  kitchen-cupboard-space-capsule, but he's in constant contact with ground control through a series of staticky transmissions.

That astronaut sitting in a cupboard speeding through space toward the moon was fuelled by the heroic story of the U.S. space program. That astronaut was me. 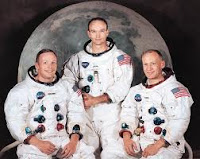 I didn't know yet about the Cold War or the politics of space travel. I was too young to remember John F. Kennedy. I didn't know who Apollo was. But I was a child of the images delivered to our home by the Journal carrier and beamed into our home on the waves that turned our Electrohome television set into a dream machine.
And what those mediums transported were the stories of the star travellers who aimed at the moon far, far above 67 Street.

As I walked in those days down those north end streets on my way to school I carried the astronauts with me. It was the only lunch kit of its kind. I don't know where my parents found it, but it was my prized possession. It was The Astronauts lunch kit, made by Aladdin Industries Incorporated, Nashville, Tenn. USA. I knew every inch of it, every illustrated scene from liftoff to Armstrong stepping on the moon to splashdown. 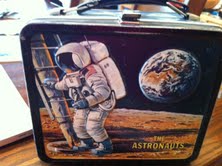 On the bottom was a reproduction of the plaque left on the moon, signed by Armstrong, Aldrin, Collins and Nixon, with the message: Here Men From The Planet Earth First Set Foot Upon The Moon July 1969, A.D. We Came In Peace For All Mankind. The lunch kit itself has been lost or garage-sale sold, but that soaring rhetoric never left me.

Years later, working at CTV in Edmonton, I found on Amazon a replica lunch kit. My friend Stefane encouraged me to spend the money to reclaim a piece of my childhood.

Some gasped at the price, but it was the easiest $100 I ever spent. (The seller knew it contained more than the memory of bologna sandwich lunches!) It sat in my office in the newsroom and sits now on the top of the bookshelf in the dining room. For today, I'll move it to the kitchen.

And tonight, following the suggestion of the Armstrong family, I'll look up at the moon and give it a wink for Neil Armstrong. And say thanks for taking me with you and getting me home safe. 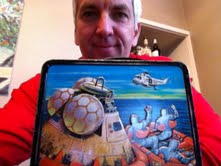