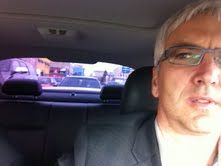 And that means I get to see a lot more than I would if I were working where only cars can get to.
There are little sidewalk scenes of humanity. They make you think.
Yesterday, two young people, well acquainted with life on the street, walked along Jasper Avenue, east  of the 97 St. divide. Young faces, but old clothes. Their clothes didn't fit. Neither hers, nor his. But they held hands. In the young man's free hand was a long-stemmed rose. He gave it to the young woman. And she smiled. They walked past the open door of a tavern beside which another man stood.
And that was all I saw of their little motion picture through the windshield of my car.

Today, another short story as I sat in the car waiting to turn out of the Vinomania parking lot and west and home along Jasper.
A woman wearing a Y windbreaker, walking with a walker, moved slowly along the sidewalk. As I waited for her to walk across the driveway in front of me, I saw a nicely dressed woman walk past her. The handicapped woman asked the well dressed woman for some money. The well dressed woman stopped, said something, and reached into her purse for a wallet from which she pulled a five-dollar bill that she handed to the other woman.
I couldn't hear what either woman said. But they smiled at each other.
And I saw the woman with the walker, as she moved in front of my car, look up to the sky and mouth the words "thank you."

August 27 update -- And this evening as I was stopped in traffic pointed east along 102 Ave near 109 St. another scene courtesy an unheralded director. The man was carrying two giant plastic bags bulging with empty pop bottles, beer cans, milk cartons. Our eyes met as he indicated he was going to haul his bags in front of my car and toward the north sidewalk. That's where a man who lives on the street, his shopping cart of possessions in front of him, was sitting. The man carrying the bags dropped them off with the shopping-cart man, and then turned the corner and disappeared. 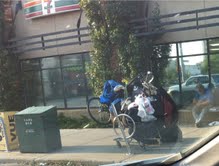