In One Eye, Out The Other!

I have said it before in this blog, but it bears repeating, and that's that sound, according to Ong, "exists only when it is going out of existence." Here is the rest of the quotation from Orality and Literacy:

"[Sound} is not simply perishable, but essentially evanescent, and it is sensed as evanescent. When I pronounce the word 'permanence', by the time I get to the '-pence', [sic] the 'perma'- is gone, and has to be gone.... All sensation takes place in time, but no other sensory field totally resists a holding action, stabilization, in quite this way."

The notion of secondary orality means much more than the strand of thought with which I cling to it. But it makes sense to me that there is something essentially oral, fleeting, evanescent, about the text and pic-based media in which we now move. (I thank my MACT professor, Gordon Gow, and my boss, Peggy Garritty, for pointing me and keeping me in this interesting direction.)

This morning, I followed to a yfrog pic a tweet from CTV Ottawa's Graham Richardson, sharing news of a triple fatal vehicle collision on Highway 401. Here is where the link took me: 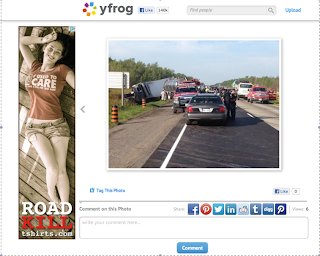 It's a kind of a typo for the digital age, this unintended conjunction of planned and known content (the highway crash photo) and the unknown advertisement (RoadKilltshirts.com). Here is what I find intriguing. If that occurred on the front page of a newspaper, a newspaper you could touch and hold and hold in place, there would be a public opinion hurricane. There would be letters to the editor and readers would jam phone lines to complain. Others would cancel their subscriptions. It would be cited as another example in the downward spiral of traditional journalism. And then reaction would go viral, like it did earlier this year when this photo and cutline about a Broadway show was paired with this headline about an accused dismemberment killer: 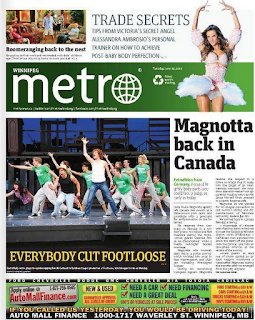 Television news as I knew it shared that print sensibility. Run a 15 second commercial for the KFC Twister wrap after a story about a tornado, and you would hear about it from offended viewers. But is anyone offended in the same way by the online roadkill exhibit? The audience that saw it (is audience, actually, the perfect term, given the Ong analysis?) is smaller, that's a given, and that may explain some of the lack of reaction. And more may be explained by the likely fact that many people comfortable in the print environment don't venture too far online, knowing they would be offended.

But there's something else, something ontological. The yfrog picture doesn't really, well, exist. Or doesn't exist in the same way a "real" photograph or a real newspaper do. There are 2,200 pics on my iPhone. Taken over the last eight months! I don't think my mother's family photo albums, carefully sorted and lovingly annnotated over 50 years, have that many pics. And they aren't called pics.

The fleeing thought is that when in some "real" sense it doesn't exist, it doesn't make sense to get angry about it. In one ear and out the other applies just as much to print-based online media as it does to many sounds and much noise in our mediasphere. It's now in one eye, out the other.

Except that what doesn't strike us as permanent is there, where? forever to recall with a Google search. And that's the sound of me going hmmm?