August 19, 2012
Sylvia Plath put it this way: "I thought the most beautiful thing in the world must be shadow." Now, I don't follow all of her meaning, but I think it is a beautiful sentence.

A couple of weeks ago, cycling on the 142nd St. bridge over the Mackenzie Ravine, I looked down to my right, and, there, down, down there,  rippling over the August leaves below, was my projected image. It was a split-second of thrill. 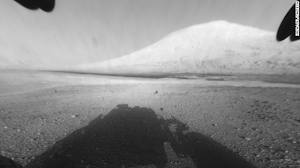 A couple of days ago, that unexamined thrill returned virtually from Mars, where Curiosity has made its presence felt. The unmanned NASA rover has been sending back images of the red planet, shots of the buttes and mesas, Gale crater, the rocks and dust scattered by its landing, Mount Sharp in the distance. It's all fascinating. But what's memorably quirky is the shadow of Curiosity that is captured in some of the pics.

This morning, back here on Earth, Shelagh and I were cycling back with breakfast from Meadowlark Safeway. In the panniers were eggs, yogurt, blueberries, a pineapple. The image of the spiky pineapple leaves poking out of Shelagh's saddlebag captured me before I captured it.

Maybe that's what a photograph is? In a word, autobiophotography. But that's not the item.

The item is that a shadow is somehow a proof that between the unblinking gaze of the sun and the canvas of earth and trees and asphalt below, in between that projector and those screens, is us.

We still get in the way.