The Ballad of Dave Mitchell

How did the media hockey tournament in Calgary go?
Bad luck for David Mitchell. Is he out of hospital?

The body of David Mitchell, better known as Mitchy, the former sports director and now videographer at CTV Edmonton, lasted approximately 60 seconds into the first game of the tournament. And that's rounding up generously to the nearest minute mark. Mitchy's spirit was ready to play, his legs were ready to skate, his heart and lungs were willing to supply the oxygenated blood necessary to fuel the effort. But a disc in his back waved the away-white flag. It seems Mitchy's 45-year-old spine is the
Maginot Line of his hockey-playing body.

"I'm out," he said to us on the bench. His eyes were question marks.

And with that verdict, punctuated as the play crashed on in front of us, Mitchy began the lonely ritual known to oldtimers hockey players everywhere. He grabbed the dressing room key, glided in pain to the rink gate at the end of the ice, let himself out and walked down the corridor to the dressing room where he somehow took off his equipment and coaxed his clothes back on. Through the wall he could hear the muffled noises and voices of the game. It went on without him. Leaving his equipment strewn in the corner of the dressing room, he left the arena and drove himself to the medical centre where he joined others on the weekend warrior mourners' bench.

The Code of the Road prevents anything said about Mitchy—or the possibility his wife and family in Devon were under the impression he was simply going to the Husky for gas and not to Calgary to play hockey when he left the house with his hockey bag—from leaving the dressing room and appearing in a blog. Nothing really can be said about the plan to cut his skate laces into pieces before
packing up his gear. And only very little can be shared about the shrine (his still-dry #2 jersey, some local flora, a dented beer can) that sprang up in his stall.

A little more can be shared in tweets like this one that came in: 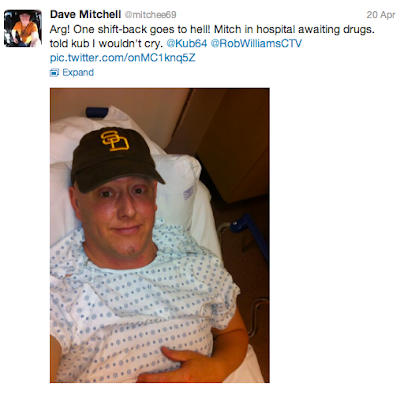 And the immediate friendly-fire responses, including this one, that went out:

The medical professionals in whose Percocet-warmed embrace Mitchy remained for the better part of the morning, delivered their findings. Bulging disc.

There is probably some truth to that, but, as we would say on the bench, that is $%&#!! bullshit.

Not to put too grim a point on it, but Mitchy's injury, plain and simple, is about death. Or, at least, a preview of the final buzzer.

Not the sensational deaths, the drownings or car accidents or fire disasters that we imagine. Just the everyday-variety bland version, the one where one day, after slower and slower, she's just over and, as beer-league hockey players are fond of saying, it's time to $%&#!! hang 'em up.

And we can be honest about one other thing.  The great good that is oldtimers hockey is the ability to confront death in miniature doses. And laugh at its hints. Over cans of cold beer that are tossed in parabolic beauty to each other behind the closed dressing room door on the other side of which is who knows what disaster waiting to happen.

So, Mitchy, thanks for the one good shift. Or half shift. And for three full days of laughs since. It'll be good to skate with you again. Check your laces first.

So, Mom, how did the hockey tournament go, you ask?  The boys made it through together.