Spring In My Step

April 03, 2013
As north end kids, we walked to school. By today's standards, it was an obscene distance. These days, my parents would be ostracized for allowing it. But walk we did. No, not uphill both ways, but certainly through all the seasons.

That was just the way it was. Once, I cut my mouth and tongue up pretty bad in a monkey bars accident (our playgrounds have evolved since then) and I was sent home, bleeding from the mouth, on foot.

Winter into spring was the best time of year to be à pied. There were still windrows to scale. There was ice to slide on. There were chunks of graded road snow to kick until we kicked them to pieces.

And, best of all, there were those frozen puddles that sagged and buckled under the tread of a size 6 Kodiak. It was a thrill to be the first of the morning to step on those brittle mirrors, slowly releasing more weight until the icy film cracked and heaved up a spurt of brownish water.

For me, that was spring. And it still is. And maybe it explains why I got off my bike this morning and took this picture: 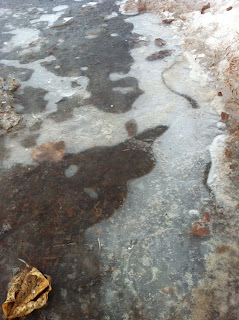 And then did this: 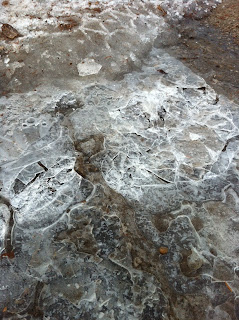 And then got off again four blocks later to capture this: 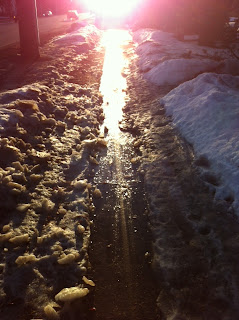