(Wednesday) - There are many unanswered questions in the Boston Marathon bombings. To the list of the obvious ones, including, who did this? why? foreign or domestic terrorism? what does it mean that no one has taken credit for this? anarchists? was this a failure of U.S. intelligence? we can add this: will the panopticon work for good?

I don't pretend to understand the panopticon, the theoretical work of 18th and 19th century British philosopher Jeremy Bentham popularized by Foucault. But it is deeply intriguing and unavoidably metaphorical. Its design stems from the idea that a guard is able to observe all celled inmates in a jail without their being able to determine if they are or are not actually being watched. It is social control by architecture. It is said that Bentham described this prison as a mill for grinding rogues honest.
A car driver who hits the brakes instead of running a red light, remembering a news story  touting new red-light cameras, has felt the force of the panopticon.
The person who alters his or her behavior or speech while talking to a colleague wearing Google Glasses, not knowing if a recording camera is rolling on their encounter, will have felt the force of the panopticon. 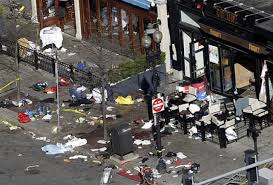 In the wake of the Boston terror attacks, officials invoked Bentham's scaffolding of modern life, imploring the public to come forward with photos and video from the scene. In the Los Angeles Times tonight is this assessment from Tom Thurman, the former head of the FBI's Bomb Data Center: "I think this will go down in U.S. history as the most videotaped bombing in history." Today, also, there is a report that a surveillance camera from a department store in Boston has captured the images of two possible suspects.

(Now, the effect of the panopticon is sterilized by criminals who would willingly commit suicide when they detonate bombs, an arguably arational impulse seemingly not allowed for by Bentham. But suicide bombing doesn't appear to be what Boston is.)

"Alex," I just asked our UAlberta classics student as he emerged from the basement, "what does panoptic mean?" (Thursday) - Well, that didn't take long.

"Seeing everything," he said.

In the next few hours or days we may learn how close to everything those cameras will take panoptic investigators. We shall see. 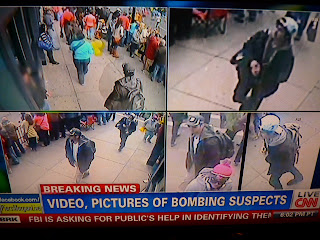