April 10, 2013
I wonder about the quiet people at political protests.

The ones who know enough to come with saucepans and drumsticks, the ones who know the words to the chants, the ones who are willing to bang on doors and put video cameras in the faces of security officers and the ones who wear red patches on their coats, all these are interesting folks, don't get me wrong. But as much as I am intrigued by their tactics, and curious about their stories, I find the quiet people, the ones who stand next to walls at the edges of the protests, just a little more interesting.

Maybe I know them a little better.

Among the protesters at this afternoon's rally against post-secondary budget cuts in Alberta was one of those quiet ones. If you saw him, you'd be right to conclude it had been a few years since he was at an event like this. And that he felt a little uncomfortable, a little out of his element.

Had he been asked by one of the many news reporters on the scene why he was there, he would have admitted that very discomfort. He might have laughed that his after-work plan had been to go to the YMCA to exercise, but that the need to make his presence felt in the rainy snow somehow was more powerful.

And if the reporter was still listening, he would have then shared a short story. About his own grandfather, another one of the quiet ones.

Because his grandfather, dead many years now, had been weirdly alive in his thoughts again recently. With the war on the wind, his grandfather, then a young man, was essentially ransomed out of what is now Belarus, then Poland, because the men of his village, sensing in him more the temperament of poet than a soldier, paid for his passage to Danzig and Copenhagen and Halifax. From there, he took the train to Edmonton in Alberta. It was 1928, and many of his fellow trainmates who knew what little awaited them in the Alberta capital crawled out the train windows in Montreal. But he stayed.

That young man married a girl from Mundare and started a family. He was a proud Canadian in a time when patriotism meant being thankful for a job hauling flour in the Sunland Bakery. His great wish for his family wasn't as much to learn the old ways, the old language, the old culture as to love their freedom and be educated.

"Learning," he would say, even though he had very little of the formal variety himself, "is like the ocean. You can go down and down and there's always more to learn."

That sentiment was in the air in the house in Parkdale where he lived, where his grandson, born in 1964, listened to him and learned from him. It was what informed those trips in the 1965 Ford Custom, in the days when families went on Sunday drives together, to this other world, imaginary but real, exotic and thrilling: the University of Alberta. Peter Lougheed was premier then.

Time flew and his grandson made good on that dream. He attended the University of Alberta and obtained a Bachelor of Arts degree. It felt very natural then, but, with the passage of time, the accomplishment acquired an unreal aspect. After all, this grandson, only two generations removed from the lonely European refugee, spent years in the most wonderful conversations at that university,
listening to learned professors lead him through the classics, through Machiavelli, Rousseau, Hobbes, Nietzsche. That education taught him to read and listen carefully, argue with reason, love music and painting and architecture. He read Pope and Gerard Manley Hopkins. He read Marx and he listened to those who supported the Sandanistas and those who followed Milton Friedman. He understood he wasn't getting a professional education, wasn't going to come out of the academy as a teacher, lawyer or engineer, but that was just fine. He was more interested in Stephen Dedalus and his hunger than a guaranteed paycheque. He learned French. And some Greek. He carried a Kittredge Shakespeare with him. And he learned about worlds that were real even though they couldn't be measured. He met his wife there. He was proud of his degree, the province that made it possible, and the grandfather who set the stage for it all. He gave his grandparents his diploma.

And so years later when this grandson, now a parent with that English degree wife of two UAlberta arts-studying sons, watched the news and learned about threats to academic freedom at his alma mater, sensing that his arts faculty would again have to defend itself in the numerical language of the conquerer, he took the train after work and joined the protest. As a quiet one. To somehow bear witness to his story, the story of an immigrant's grandson who got to Athens and Jerusalem by going to the University of Alberta.

And when he was at the protest, he felt the strangest thing. As he walked down a legislature corridor along with other demonstrators, he felt he was somehow walking along the gangplank of a ship and into a new world—and he was quietly glad he'd made the journey. 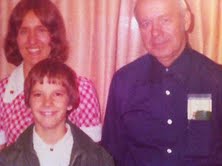