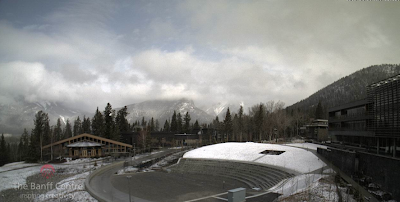 The structure of modern life, Carey has said, is that we are being watched. And that we are watching.

Lately, I have been watching Cascade Mountain and a few of the buildings at the Banff Centre via the centre's cool webcam. I check it out in the morning, I guess, to try to simulate the thrill of getting that first view of the mountains when actually lucky enough to be in the Rockies—and disciplined enough to get up early. Occasionally, I use it as a momentary emotional escape hatch out of an office tower meeting pushing an hour that should have been 30 minutes. You get the picture.

For a rectangular image that sits on my laptop, the webcam screen is, in a way, enlargening. Typically, when we get back from a vacation, whether to the mountains or wherever, I return resolved not to submit to the tyranny of the now visible. And to remember, for instance, that at this exact moment there are people walking into the Safeway on the corner of Robson and Denman in Vancouver. Or walking past the Peace Tower in Ottawa. Right now, just not here, laundry is on the line in a neighbourhood in Havana. Right now at Cafe Trieste in San Francisco there are sounds of a latte being made and maybe some accordion music being piped in. At this very moment at Coyotes in Banff, if you glanced to your left walking down the stairs, you would see the kitchen chefs at work. And in another instance of right now but not right here, Cascade Mountain looms over the Banff Centre.

I don't know what the purpose is of having all these internal screens running, but it seems somehow important to remember there are many video rooms in this big mansion. Webcams help with this further-out work.

But the webcam experience also does an opposite kind of work, investing a newness in the seemingly mundane scene in front of us. One of the any criticisms of webcams is that nothing happens. That's true, until you look.

And see that where once there was no truck: 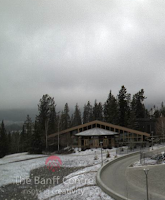 Moments later, there is: 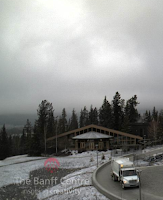 Where the view one second is of a veil of grey: 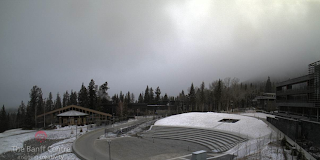 A few minutes later it is pierced by hints of hopeful blue: 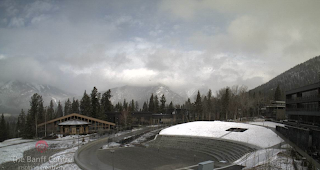 Other times, other smudgy contingencies, like a piece of snow or ice on the lens, make for newness: 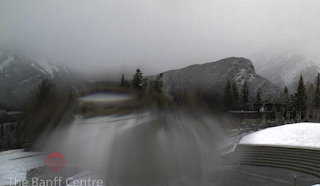 Further out to the "exotic," yes, but also further in to the familiar.

James Joyce's Ulysses, Lefebvre has said, was a "momentous eruption of everyday life into literature," later finessing the point by saying "it might, however, be more exact to say that readers were suddenly made aware of everyday life through the medium of literature or the written word." In his article, Webcams, Surveillance & Everyday Life, Wise suggests this is precisely what is happening with webcams.


There are deeper depths to plumb when thinking about webcams and what they involve the viewer in. One question for me is to what extent I am being viewed (by myself?) as I gaze at Cascade Mountain? Another is whether I am mistaken by feeling I have somehow gotten away from the grids and arithmetic and garishness of the rational city by slipping into the Rockies via this computerized portal?