July 20, 2012
I don't know the point of adding to the words, the adjectives that are everywhere tonight, on the air, online, in newspapers, on radio, from experts, from reporters, witnesses, family members, survivors, police officials, politicians and seemingly everyone else about the shooting in Aurora, Colorado. Twelve people were murdered and 58 wounded at a midnight screening of The Dark Knight Rises in that community.

But I want to try this.

Everyone who was killed had his, her own unique story, and those will start to be told in the hours and days ahead. This woman who dodged death only weeks ago. That young man who decided at the last minute to join his buddies at the movie. That boy who was a big Batman fan. The coach. The mother. The girl who died on her birthday. All of their individual hopes and plans for their future, their successes in the past, the unique impact they had on those around them, their medals, certificates, writings.

But they did have one thing in common in life, beyond what they now share in death. 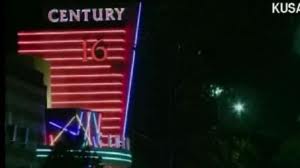 And that's the movies. They believed in the thrill of the movies. Some may have been aware of and thought about what the movies meant to them, and others may have thought about it no more than knowing they loved sound and moving images together. And being in the same room as friends and strangers who felt the same way, as if they were in a ship and the world outside was the unreal thing.

On the TV news the day after the shootings, Edmontonian Nicole Durepos put it this way:

"I was just, I was just, I couldn't believe that that somebody would do something as terrible as that when people are just sitting there trying to enjoy themselves watching a movie," she said.

Jason Alexander, at the end of a long in a long tweet about gun laws, said this: "Yesterday, a whole bunch of them went to the movies and tonight their families are without them."

That a change of lens could transform that theatre into a shooting gallery, a box of death deeply offends me. And makes me sad. And keeps the pictures of those victims in my mind.