July 28, 2012
Something about who we are in language struck me last night at Hawrelak Park.

We were at the Interstellar Rodeo. It's a new festival. Our friend Murray, who can swim in the words deep end, describes it as the folk festival for the one percent, because it's built around a concept of pairing the musical acts on stage with a wine. And, so, it's not just Texas roots-punk-rocker Alejandro Escovedo, it's the underground-and-always-threatening-to-be-pulled-into-the-mainstream Alejandro Escovedo and a glass of De Angelis Rosso Piceno with which he shares a commitment to quality and an ambivalence to commercial success.

But that's not the item.

What is the item was the young boy, Mason, who was sitting alone with his family in front of us on the hill who, at turns, crushed plastic cup, broke tree twigs, and opened and closed and open and closed (repeat) his mother's umbrella.

"It's a peacock," he told me, as he held the umbrella behind him and triggered it open into what he invited us to consider to be a fan. "You know, like a peacock's tail."

Mason didn't know that he was dealing in metaphor. This is that. This very different travels across some  sort of invisible border and becomes that. And, mysteriously, we understand it. And make a connection, in this case, across about four decades. 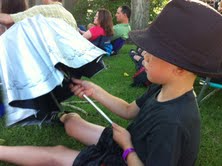