Tonight in Aurora, Colorado, U.S. President Barack Obama decided that what the community, the country, the campaign most need right now is a story.

And I think that the reason stories like this have such an impact on us is because we can all understand what it would be to have somebody that we love taken from us in this fashion.


Some of the stories are remarkable.


There's one particular story I want to tell because this was the last visit that I had and I think it's representative of everything that I saw and heard today.


And I don't think this story has been heard -- at least I hadn't read it yet -- but I wanted to share it with you. 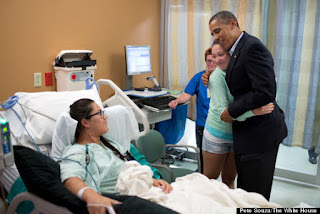 The U.S. Commander-Of-Attention-In-Chief went on to tell the story of two friends, Allie, who was shot while trying to draw the attention of others in the theatre to the gunman's canisters, and Stephanie,  who stayed with her friend, applied pressure to her neck wound with one hand while calling 911 on her cellphone with the other. All this while the bullets flew, finding their targets in flesh and bone. Through all of this, Obama demonstrated his touch for visual storytelling, applying his own fingers to his neck, intensifying his story by the use of gesture.

With these complicating actions of the plot behind him, and a resolution provided earlier (the shot girl will survive), his evaluation was next.  What is strange, what is uncommon, why was this story worth sharing?

I don't know how may people at any age would have the presence of mind Stephanie did, or the courage that Allie showed. And so, as tragic as the circumstances of what we've seen today are, as heartbreaking as it is for the families, it's worth us spending most of our time reflecting on young Americans like Allie and Stephanie, because they represent what's best in us, and they assure us that out of this darkness a brighter day is going to come.


(Here one recalls another remarkable storyteller who walked along Sandymount Strand thinking a thought in the gathering dusk as he looked at a lighthouse:  People afraid of the dark...Light is kind of reassuring. Not going to hurt you.)

Ten words after "brighter day," the President says it: Aurora. The dawn. And we have our elegant coda.

So far, both Obama and his Republican challenger Romney have not taken up New York City Mayor Bloomberg's challenge to lay out their policies on gun laws. This is said to be out of respect for the victims and the wish to not be seen as politicizing their deaths.

It may also be because the political art has something to do with giving the people what they want. And a story is always a good place to start.