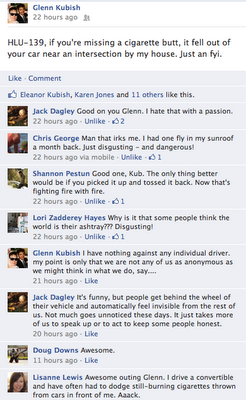 It broke my own rule about never engaging with other drivers. It almost snapped my short tolerance for those who judge and then find refuge in social media. I don't know why I did it.

We were sitting at a red light on 87 Ave and 149 St last night. It was a beautiful, peaceful evening. The driver in the car next to us rolled down the window and threw a cigarette butt onto the ground.

I admit it. I don't like littering. Long before reducing the size of your footprint became popular, I was taught to not throw garbage of any size, shape on the ground. In university, we learned about the challenge of the commons and the lack of motivation people feel for public property. I actually think about the birds and other creatures that might eat an errant cigarette butt. And the irony is priceless. Smokers willing to pollute their lungs are unwilling to keep evidence of their habit in view and nose. And, so, out the window the butt goes.

There are times when I drive for work to Calgary that I will take a company fleet vehicle instead of the Honda of Shelagh's little BMW. And I drive differently, I admit it. I don't drive as fast, I pass less frequently. It's simple. I don't want to have my driving affect my status at work. The logo on the vehicle  door does double duty. It reminds other vehicles of the company, and it polices my behaviour.

As I posted it, I hesitated. Why am I so confident in my ways that I am criticizing others? How about that oil in the garage? Are all of my actions spotless enough to withstand the social media surveillance network? And my name is there to see. I can be found at home. And what if the offender is someone I know or work with and couldn't then we just laugh it off then?

But I thought it was worth a try. Let's see what my Facebook friends would say. And resolve to remember that if I don't put reasonable limits on my own actions, I live in a society with the technological sharing tools that will point out my transgressions, big or small, to all.

Maybe there is value in posting the Facebook status. Maybe it's better if we police each other without malice, with some humour, and with a ready forgiveness not available to the bylaw officer and his ticketbook.

Having said all that, it would be better if I had the courage to just tell the smoking litterbug to keep the butt inside the car. But.......