July 27, 2012
We should have known something was up when the Queen joined Facebook. But we didn't really see what was coming until today at the opening ceremonies of the London Olympics when HRH joined the fun.

In a blend of reality and fiction, entertainment industry and royalty, fun and frump, Queen Elizabeth II stole the show by playing a cameo role in a video shot at her castle with Daniel Craig in character as James Bond.

Bond, wearing his trademark tuxedo,  is ushered into an ornate sitting room where, could it be, the Queen is sitting at a writing desk. Bond stands waiting. He clears his throat to remind her he is there. Could it be the real Queen, the viewers ask? It is. 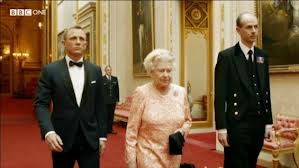 Bond then escorts her through the red-carpeted hallways, the royal corgis chugging along, and out to a helicopter from which stunt doubles parachute out and down into Olympic Stadium.

Time may blunt my assessment, but I thought her cinematic debut was a masterstroke. Bowing to the reality of mashup, the Queen allowed herself to be part of an elaborate story where she played equal bill with the creation of Ian Fleming.

For a smile. And a laugh. And a cheer.

One wonders what layers of royal image risk management officers the idea had to go through. What was the original reaction to the scheme? Who had to say, your Majesty, Danny Boyle has this notion of your acting a small part with, well, um, with Bond? Was she not amused?

But the world has changed. And this is proof of it. The keepers of the serious are losing their grip, and they are realizing it. Humour matters. The ability to poke fun at ourselves matters.

So that we didn't miss the point about informality, the producers of the extravaganza, only moments later, brought out the London Symphony Orchestra -- with Rowan Atkinson as Mr. Bean playing the organ.